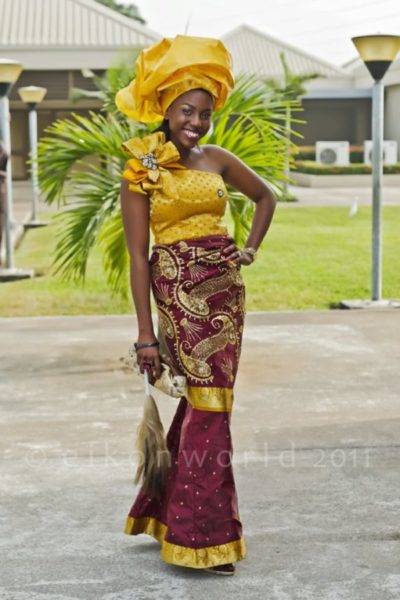 Adaigwe is a representation of all Igbo Girls

“Adaigwe” as the daughter of heaven implies that an Igbo girl believes that God is her maker and provides food, shelter and other means of livelihood.”Igwe” is interpreted as the abode of God who made and owns all things. An average Igbo girl believes that God gives rain for bountiful harvests. This is expressed during the new yam festival, a period in which communities invite their relations and well wishers to celebrate with them. Yam is known as the King of all crops in Igbo land. During the New yam festivals, Adaigwe participate actively, helping her family to prepare different food items. She and other girl dance to entertain their visitors. At such festivals, girls ripe for marriage are engaged. It is expected that after new yam festivals suitors go into communities to seek hands of ripe girls for marriage.
“Igwe” also means” iron”. Adaigwe means the daughter of” iron”. This implies that she is the daughter of strong and war-like people. In some Igbo communities, wrestling matches are celebrated. A period in which families, clans and villages showcase their strong men. Adaigwe who becomes a mother nurtures her children to be the strong men of valour .She encourages them not to be lazy and weak before their opponents. Adaigwe grows with her male counterparts. She is strong, dutiful,well behaved,courteous and serviceable.
“Igwe” means “King”.Adaigwe by this has at the back of her mind that she represents a family whose spiritual head is God. Adaigwe does all to maintain a good ethical life. She believes that God is her rewarder .Adigwe does not engage premarital sex.Abortion is an unmentionable word or practice for Adaigwe.She readily brings any suitor to her parents.
There is no practice of contract marriage in Igboland.It is either one is married or not married. Igbos believe in lifelong marital relationship except they find out that parties in marriage are deceptive and careless. At this point Igbo families in agreement dissolve the marriage and the partners remarry.Adaigwe, does not lay much impact on her parents for her fortune or misfortune, rather she joins her parents to pray that God shall provide all protection and all means of livelihood.An Igbo girl believes that being chaste is reward able by God. By this belief,she knows that God gives children.It is worrisome for an Igbo girl to marry without children. At this juncture of life, people start to evaluate the maidenhood of the girl. If children are born, people thank God with her, but if no children, ridicule follows her.