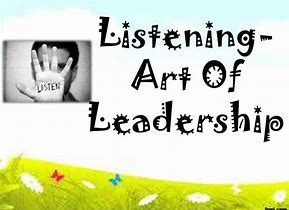 I attended a two days “Leaders in London” Conference end of last year. The speakers’ line-up was impressive. Tuesday started with Mr Mikhail Gorbachiv (in person), Professor Marvin Zonis, Alan Leighton, Terence Conran, Lou Gerstner, Professor Clayton Christensen of Harvard and many others including the one and only Bill Clinton (live via Satellite).

On the Art Of Listening and Leadership – “Something I have been trying to learn for the last 25 years” I want to share with you the lesson and the leadership by example that Bill Clinton tough us all in the conference on the art of listening.

After he made his speech, he started taking questions. I asked one too, the President and the audience were visibly amused by my name especially after assuring them that “I am the nice one”.

Among the attendees there was a lady who didn’t speak good English and earlier in the day when she was given the microphone to ask a question, she went on and on for 5 minutes and no one understood what she was trying to ask or say and we all laughed. When it came to Clinton question time, she raised her hand again to ask a question, the moderator warned her to be quick and to the point. The lady took the Microphone and started to rumble on and on. Again it seemed that no one understood what she was saying, people started to laugh, boo, clap their hand for her to stop. After a few minutes of this saga the moderator cut her microphone off and gave the question time to someone else. People were cheering his decision to move on, after all no one wanted to be embarrassed in front off the great president.

While all this saga was taking place and all of us laughing and disapproving of this behaviour from the lady, only one person was NOT laughing, Bill Clinton. In fact he leaned forward to the camera and put his hand on his ears and focused intently and seriously. 30 minutes passed while he answered a few other questions from the audience and when the time came to close, he said very politely; Wait Rene, before you close… Earlier on a lady asked me a long question and I would like to talk about that for a minute.

The hall dropped into silence, he continued by saying, in fact the lady made a very important point, and he went on to summarize her point which was about families in the developing world (none of the audience knew that), and he asked to be allowed to answer this important question, which he himself put together from her scattered little stories before we the audience interrupted and stopped her.

Now I began to understand at the hands of the guru of leadership and listening in practice and what he was trying to teach by his actions. When we JUDGE any one or any thing, we stop listening. It seems that the act of judgment trigger some chemicals in our ears that physically stops us from listening. Pre-judgment seems to be the mother of all sins on this planet. There seems to be no other solution to world problems but the forgotten art of listening and stopping judgement. This is what I learned that day and I hope it stays with me forever.

This was also an impressive performance by a world leader who is not only very intelligent but also listens very seriously to what people are saying.

Mirror of Self Reflection especially for the youth.

What truly inspires us passionately and greatness in life ?

I will never forget this incident which taught me a lot about leadership and what listening is all about and here I am humbly sharing my experience with you hoping that it adds a little to our understanding of the Art of listening.