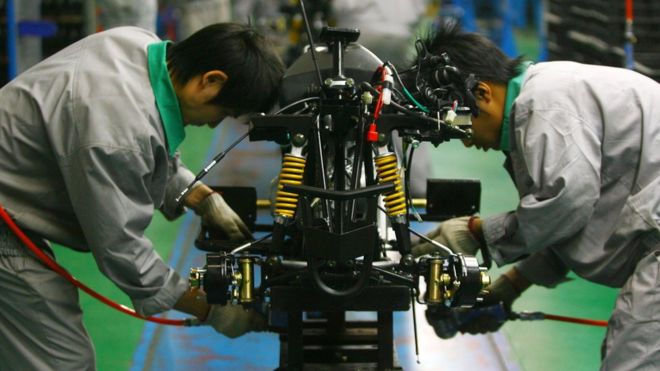 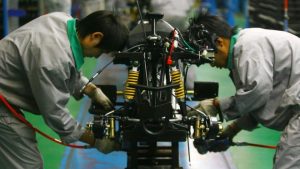 Trade tensions between China and the US have been ramped up after Beijing responded to US plans for putting new taxes on hundreds of Chinese imports.

China said it would place 25% trade tariffs on 106 US goods, including soybeans, cars and orange juice.

The tit-for-tat action comes hours after Washington detailed about 1,300 Chinese products it intended to hit with tariffs – also set at 25%.

The White House said its proposals were a response to unfair Chinese intellectual property practices.

Earlier, Beijing said it “strongly condemns and firmly opposes” the proposed US tariffs, calling them “unilateralistic and protectionist”, and vowing to retaliate.

It then responded with specifics, as the Chinese finance ministry published a list of its own.

The products targeted by the Chinese tariffs were worth $50bn (£35.5bn) in 2017, according to the Chinese commerce ministry.

US chemicals, some types of aircraft and corn products are among the goods facing the taxes, the finance ministry said.

Extra tariffs will also be placed on whiskey, cigars and tobacco, some types of beef, lubricants, and propane and other plastic products.

US orange juice, certain sorghum products, cotton and some types of wheat, as well as trucks, some SUVs and certain electric vehicles, will also be subject to the new duties, the ministry added.

Economists had previously warned the Trump administration’s move to penalise China with the tariffs could prompt Beijing to retaliate and lead to higher prices for US consumers.

The planned US tariffs are the result of an investigation ordered by US President Donald Trump into China’s intellectual property practices.

Last month, he said the inquiry had found evidence of problems, such as practices that pressure US companies to share technology with Chinese firms

The office of the US Trade Representative, which handles trade negotiations, said that its tariffs would apply to about $50bn of Chinese imports.

That was an amount which was “appropriate both in light of the estimated harm to the US economy and to obtain elimination of China’s harmful acts, policies and practices”, it said.

The list includes parts of communication satellites, semiconductors, aviation equipment and brewery machinery, as well as more niche products such as bakery ovens and rocket launchers.

A final list will be determined after a public comment period and review, expected to last about two months.

Beijing has been adamant that it did not want a trade war, but that it would not not back down under US pressure.

“Any attempt to bring China to its knees through threats and intimidation will never succeed. It will not succeed this time either,” foreign ministry spokesman Geng Shuang said.

“There is no winner in a trade war, and an initiator will harm itself as well as others.”

Mr Geng said China had referred the US to the World Trade Organization.

Hopes for a resolution

China’s economy has become less dependent on selling goods abroad in recent years, which is likely to blunt the effect of the US tariffs, according to analysts for S&P Global Ratings.

The US was the destination for about 18.2% of all Chinese exports in 2016, according to the US trade department.

American business groups have urged the two sides to try to resolve the issues through talks, expressing concern that threatening tariffs could lead to a dispute that hurts the US economy.

“The administration is rightly focused on restoring equity and fairness in our trade relationship with China,” said the US Chamber of Commerce.

“However, imposing taxes on products used daily by American consumers and job creators is not the way to achieve those ends.”

Speaking before Beijing announced its retaliatory measures, Joseph Brusuelas, chief economist at RSM US, said he did not think the Chinese would take the US list seriously, pointing to low-demand items such as monitors with video cassette recorders.

Instead, he said the main outcome was likely to be higher prices for US manufacturers – and eventually, consumers.

That may not be enough to persuade the Trump administration to opt for a different strategy, he added.

“At this point, if the Trump administration does not follow through on this, they’re going to lose face and credibility,” he said.

The actions proposed by both countries came just after China hit $3bn worth of US products with tariffs.

That was in response to separate steel and aluminium tariffs the US has imposed.