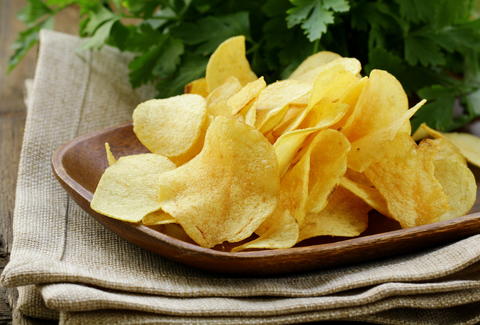 The man who invented potato chips was George Crum, who was both African-American and Native American, and a chef employed as a chef at Moon Lake Lodge –an elegant resort in Saratoga Springs, New York. And getting complaints from a customer about thick, soggy fried potatoes, Crum wanted to teach the patron a lesson, so he sliced a new batch of potatoes as thin as he possibly could, and then fried them until they were hard and crunchy. Finally, to top them off, he added a generous helping of salt. To Crum’s surprise, the dish ended up being a hit with the patron and a new snack was born.

Crum found success with his invention and even opened his own restaurant in 1860, called “Crumbs House.” Served on each table was, of course, a basket of potato chips –which was a hit with his upscale clientele.  But in those days, people of color were not allowed to take out patents on their inventions and Crum never attempted to patent potato chips. The snack was eventually mass-produced sold in the bag without giving him any credit.

Fun Facts: Flavors Around The World!