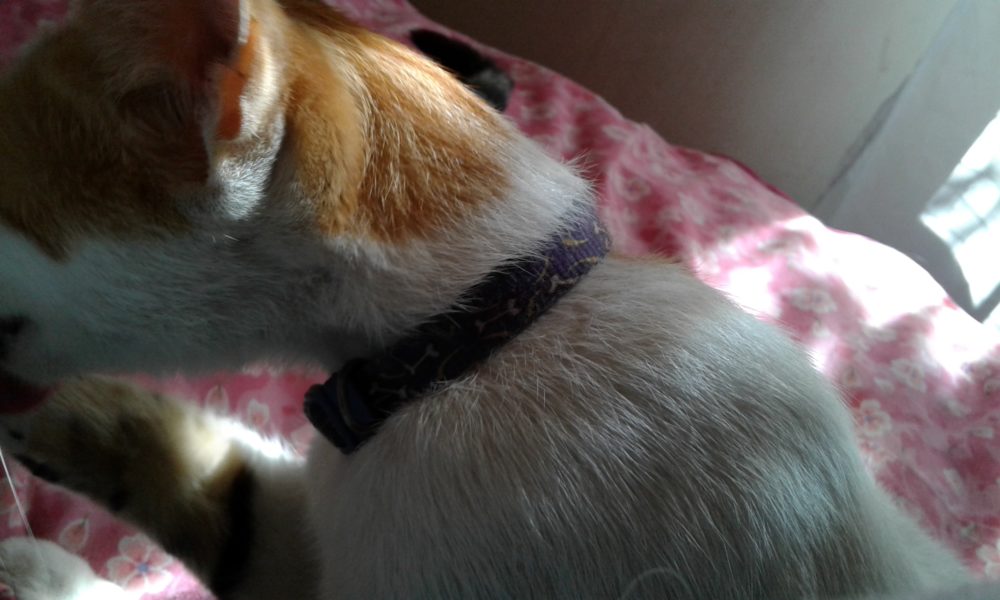 Yesterday, I heard kittens crying inside a grassy portion of the road near us, and because I love animals, like cats and dogs, I stopped to observe where the cries where coming from.

They were two newly-born cats, presumably mothered by a feral cat, because it gave birth among the grasses. One of the kittens crawled towards the road, and the sun was shining hot, so I got a big tree leaf I found there, wrapped the back part of the kitten and I transferred it to a shaded area.

Kamuning was a Suspect!

I saw Kamuning followed me while I was walking, she even pointed to Kamuning, to ask his son if he was the suspect. Good thing Kamuning was absolved, he is not guilty of biting and scratching the neighbor’s son. If ever Kamuning was the one, then I had to spend for the boy’s anti-rabies vaccination, though I had Kamuning vaccinated for rabies last September. It will expire this coming September, so I have to take him to the Veterinary Clinic to get the new shot again.

I told my neighbor that Kamuning has the anti-rabies shots. She said he took her son to the hospital to get the anti-tetanus shot, then to another animal bite clinic to get the anti- rabies shot. It will be for some three to six sessions (vaccinations), I think.

She said those kittens on the grass should be thrown away because when they grow, it will pose a danger also because of rabies. I pitied the stray cats, though I could not adopt them because I already have Kamuning. I told her the village helper usually takes away the feral cats he finds among the grasses. I didn’t know where he
“dumps” them. I hope someone would adopt them.

Cats are More Dangerous than Dogs

The son’s grandfather approached us when he saw us, and he said cats can be more dangerous than dogs. I said yes, because cats always lick their toes, their furs, and if it has rabies, it could easily infect those who will touched or be scratched by them!

The veterinarian who administered the anti-rabies vaccination on Kamuning told me this, saying cats should really be treated with anti rabies shot. Dogs also, but one cannot get rabies from an infected dog unless it bites him.

Some people do not deserve respect

Cat is So Wise; Destroyed Window Screen to Get Inside

To be safe, cats and dogs should be given anti rabies shots yearly. Cat and dog owners should take note of this because rabies is a deadly virus.