Available Balance
How to protect yourself from Mobile radiation?
Health
manoj
0 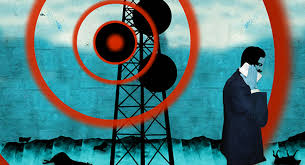 Why cell phones are unsafe?
Cell phones emit signals via radio waves, which are comprised of radio frequency (RF) energy, a form of electromagnetic radiation
The controversy lies over whether or not cell phones emit enough radiation to cause adverse health effects. The concern is that cell phones are often placed close to or against the head during use, which puts the radiation in direct contact with the tissue in the head or they wear it on their hip causing potential danger to the kidneys and liver.The added concern with non-ionizing radiation, the type of radiation associated with cell phones, is that it could have long-term effects. Although it may not immediately cause damage to tissue, scientists are still unsure about whether prolonged exposure could create problems. This is an especially sensitive issue today, because more people are using cell phones than ever before.

The rate at which radiation is absorbed by the human body is measured by the Specific Absorption Rate (SAR), and its maximum levels for modern handsets have been set by governmental regulating agencies in many countries. In the USA, the FCC has set a SAR limit of 1.6 W/kg, averaged over a volume of 1 gram of tissue, for the head. In Europe, the limit is 2 W/kg, averaged over a volume of 10 grams of tissue.Many scientists argue that the radio wave has been found to create damage NOT related to thermal heat damage, which the industry has long argued is the only possible cause of biological harm. Therefore, simply lowering the SAR rating on cell phones — which determines how much radiation your body absorbs – or making sure your phone is within legal SAR limits, will not guarantee safety by any means.

Scientists on the other hand claim that the biological danger from Wi-Fi routers, cell phones and land-based portable phones comes from two sources:

The modulated information-carrying radio waves resonate in biological frequencies of a few to a few hundred cycles per second, and can stimulate your vibrational cellular receptors, causing a whole cascade of pathological consequences that can culminate in fatigue, anxiety and ultimately cancers.

Cells interpret even a minute amount of cell phone radiation as a threat, and shut down. This is a response intended to protect them, but when you talk on a cell phone, it lasts for far longer than your body can handle.  A lot of the damage is caused by the disruption micro tubular connections that allow biophotons to communicate between cells, which decreases intracellular communication. Increased deposits of heavy metals also begin to accumulate in your cells, which increases intracellular production of free radicals, and can radically decrease cellular production of energy, thus making you incredibly fatigued.

Once your body’s communication system is damaged, it is very easy to develop all sorts of pathologies related to disrupted intracellular antioxidant systems and heavy metal toxicities.

Mobile Phone Radiation Causes Headaches and disrupts Sleep, claims Study
A number of studies have been conducted to explain the side-effects of using mobilephones. The latest one says that the radiations emitted from phones cause headaches and could also interrupt one’s sleep patterns.

Older studies have found that excessive mobile phone usage can increase mouth cancer risk and can even cause tumors. Then later, studies showed that mobile phones are safe for short-term. Another study even proved that cell phone related headaches are all in the mind.
Regarding the latest cell phone study, the researchers from Wayne State University and Sweden’s Karolinska Institute say that participants who were exposed to radiation from mobile phones during the study were found to experience headaches, change of moods, confusion and trouble in sleeping.

So What Can You Do?
There are many simple precautions that you can take to reduce your exposure to information-carrying radiowaves and the electromagnetic radiation emitted from your cell phone – both of which are hazardous to your health. Here are my best guidelines:
Children Should Never Use Cell Phones:Barring a life-threatening emergency, children should not use a cell phone, or a wireless device of any type. Children are far more vulnerable to cell phone radiation than adults, because of their thinner skull bones.
Reduce Your Cell Phone Use: Turn your cell phone off more often. Reserve it for emergencies or important matters.
Use A Land Line At Home And At Work: Although more and more people are switching to using cell phones as their exclusive phone contact, it is a dangerous trend and you can choose to opt out of the madness.
Reduce or Eliminate Your Use of Other Wireless Devices: You would be wise to cut down your use of these devices. Just as with cell phones, it is important to ask yourself whether or not you really need to use them every single time. If you must use a portable home phone, use the older kind that operates at 900 MHz. They are no safer during calls, but at least they do not broadcast constantly even when no call is being made.
Use Your Cell Phone Only Where Reception Is Good: The weaker the reception, the more power your phone must use to transmit, and the more power it uses, the more radiation it emits, and the deeper the dangerous radio waves penetrate into your body. Ideally, you should only use your phone with full bars and good reception.
Turn Your Cell Phone Off When Not In Use: As long as your cell phone is on, it emits radiation intermittently, even when you are not actually making a call.
Keep Your Cell Phone Away From Your Body When It Is On: The most dangerous place to be, in terms of radiation exposure, is within about six inches of the emitting antenna. You do not want any part of your body within that area.
Use Safer Headset Technology: Wired headsets will certainly allow you to keep the cell phone farther away from your body. However, if a wired headset is not well-shielded — and most of them are not — the wire itself acts as an antenna attracting ambient information carrying radio waves and transmitting radiation directly to your brain. Make sure that the wire used to transmit the signal to your ear is shielded.The best kind of headset to use is a combination shielded wire and air-tube headset. These operate like a stethoscope, transmitting the information to your head as an actual sound wave; although there are wires that still must be shielded, there is no wire that goes all the way up to your head.