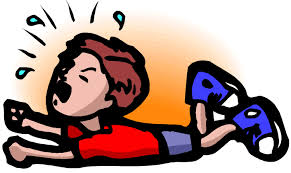 Years ago I ran into a very good friend of mine at the Plaza.   She had her son, who was about three years old with her.   We were talking and I followed her into a clothing store.  Suddenly, her son threw himself on the floor and began to have a tantrum.

I was stunned because I never expected that she would have such a horrible brat.

Clearly, he’d performed this repulsive behaviour before as she ignored him,  just tossing to me, ‘maybe someone will step on him’ as she walked on.

I had seen this kind of brat maybe twice before,  horrible, loud, repulsive feral children. I never expected my friend to have raised one.   None of my children ever acted that way, but then, I never raised feral children.

It comes when parents don’t toilet train a child early enough, when they don’t set limits which are punished when broken.  That this child could throw himself on the ground, demanding attention indicated a number of serious parenting mistakes.

Subsequently, as we were leaving the store, he took himself up and followed us out.

Watching the American President I am looking at an ugly adult version of this brat.  I realise the only method to deal with him, by the Press, is to ignore him.

I can not see, with all the events in the rest of the world, why the Press should bow to his every tantrum.  Ignore him.  Push any story to the end of the news cast, focus on other things that have nothing to do with him.

As my friend’s son, all he wants is attention. Clearly, he wasn’t properly toilet trained as a child, clearly his parents pandered to him and so, he grew up thinking his every fart should be taken as wisdom.

Yes, for the rest of the world, he’s nothing but a joke, and being the President of the United States, we get to laugh at their expense.  However, the American press has to stop giving him so much time.   Refer to one of the speeches, but don’t carry it on air, and ignore much of the tantrum.

What this Narcissist that Americans elected wants is attention.   He is living in his own sick twisted world and needs people to look at him.   By depriving him of that attention, and focusing elsewhere, at least the world will be protected from the more unsavoury aspects.

I assume my friend’s response to her son’s tantrum may have led to his ceasing of such behaviour.   He received no attention from her for his performance.