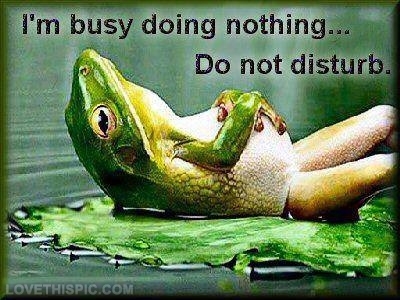 Connie worked for the King of the Bosses From Hell for just over three years.  During that period she was more robot than woman.    She changed a great deal, but didn’t know it.

She woke up at 7 am each day so as to be ready by 8 am when her lift came.   She had a phobia of being late.

During her time in the office she stole minutes to escape Hell which the Devil tended to uncover.

When she escaped Hell and took another job, she was able to move her time a bit, so her 8:00 pick up often became 10:00 so her alarm was set for 9 am.   She was uncertain when she was to leave, and this caused her stress.

She was not used to being treated as a human being or with respect.

After a few months she began to tone down a bit, breath, but it was nearly a year later before she felt like herself, sort of.

She realised that all the pressure that she had lived under for three years had not be excreted.  Belatedly, she appreciated that she need down time. Real down time.

For some it is ‘nerves’.   They have a breakdown of various levels of stability.   For some it is physical illness, often constipation or loose bowels.  For some it is a level of stress in which anything can set them into a tirade.

This is because, like Connie, they don’t give themselves ‘down time’.

We are taught to be useful, to fill our days with work of significance.  Not to waste time.  We are taught that we are to be, do, think, and not ‘let ourselves go’.

Connie was lucky.  She realised it.   And so, she began a period of ‘sloth’.   She took time off from work on occasion to sit home and watch Television online.  Seeing all the shows she had missed because she didn’t have time to watch them.

Slowly Connie began to feel like herself.  Slowly, she excreted those years of Hell.

For Connie, it was the Boss From Hell.   For others it could be an abusive relationship.   She didn’t ‘work’ at getting over it.  She didn’t ‘work’ at anything. She let herself relax and drift without any pressure and her only real commitments were an occasional visit to the office and bi-weekly supermarket journeys.  Neither taxing, nor with any emotional context.

Related Posts:
Recuperating from the Boss From Hell

Strategies To Deal With the Worst Boss

Bullying is not a new, but a very old phenomenon.

The Exorbitant Cost of Demotivation

Sometimes to get over a trauma, whether imprisoned in one horrible situation or another, one doesn’t fight, one gives themselves a nice period of ‘recuperation’, in which they do nothing.

abuse, boss from hell, getting over it