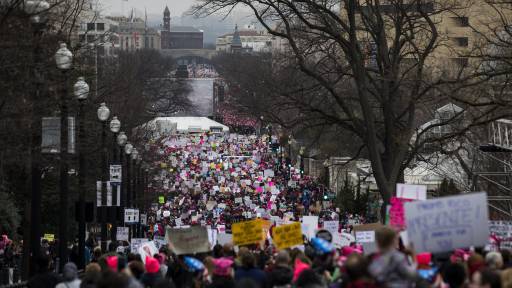 A liar, who will twist and rewrite, and shout at anyone who dares push forward the truth.

Yesterday, he has a very sparse turn out for his inauguration.  Anyone can see the actual images of yesterday and compare them to today, and know that more than twice the number of people came out today.

Sure, there are women who hate themselves who don’t see anything offensive in Trump’s words or actions.   This is how they’ve always been treated; like dirt.  They are accustomed to that kind of treatment.

But a lot of women do not hate themselves, do not think they are inferior, and are outraged that a man who can speak of them in that kind of voice, with those kinds of words, could be elected President.

Trump is ‘Not My President’.

Yes, there are Blacks who hate themselves and think they are inferior who voted for Trump.  That is their problem which they need to recognise.

But there are a lot of People of Colour, who did not, do not, will not support Trump and his racism.

Trump is a sexual predator, a horrible spoiled brat, a bully, who has found and elevated the most negative aspects of America.

The Oil Magnates who don’t care about the environment, they care about their pockets.   They know oil is in its last decades, because solar and wind are so much cheaper and better.    They are going to get as much money as they can, and their good old boy, Trump, is going to help them.

The Insurance Gorgons don’t like Obama Care.  They like people to be in debt for the rest of their lives to pay for an operation.  And those who can’t, should just die.    Rich people want to be richer, not share their wealth. And Trump will help them.

Trump should make more money out of being President, considering all the kick backs and shares and gifts he is going to receive.

Of course, the average American, with the I.Q. of Forrest Gump won’t see it, won’t believe it.  They’ll believe the lies Trump will tell them.  And then, maybe, just maybe, after a year or so, they’ll realise that they voted against themselves.

Related Posts:
Guns in America.Today’s debates in the United States

Are You Traveling to America? Nope

What Pie Is He Expecting To Get?