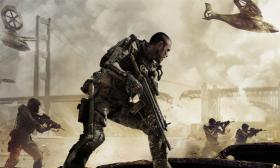 Call of Duty is one of the most successful game franchises of all time. Players love it for its realism, humor, movie-quality clips, and thriving multiplayer community. But since its first release in 2003, the game has become increasingly violent. Though Common Sense Media recommends the game only for adults or very mature teens, we know lots of younger teens — and even tweens — play it.

There are many titles, as well as apps, in the Call of Duty collection. If your kid is interested in the game, find out which version, and read the full Common Sense review.

, Platforms: PlayStation 3, PlayStation 4, Windows, Xbox 360, Xbox One (2015)
With zombies, sex, salty language, and other mature features, Call of Duty: Black Ops III is actually a bit of a departure from previous COD games, many of which are based on “real” events (such as World War III). This one has lots of modes that give the game a lot of variety (and violence), but there’s also an option to turn off the more graphic content.

Platforms: PlayStation 3, PlayStation 4, Windows, Xbox 360, Xbox One (2014)
This gritty, brutal near-future war game has players firing a variety of realistic weapons at human enemies who scream, bleed, collapse to the ground, and die when shot. Cinematic sequences depict atrocities ranging from villains shooting allies to the physical torture and execution of bound prisoners

Platforms: Xbox 360, PlayStation 3, Nintendo Wii U, Windows (2012)
Black Ops II has players engaging in graphic combat that involves constant killing using realistic weapons, with blood and gore pouring across the screen during more intense scenes. Players are cast in the role of good guys during most of the campaign, but they also take on the role of the game’s villain in a couple of pivotal scenes, giving them opportunity to do evil.

Platforms: Xbox 360, PlayStation 3, Nintendo Wii (2011)
In this extremely violent installment, players spend the vast majority of their time engaged in chaotic firefights, killing hundreds of enemy combatants with a wide variety of realistic weapons ranging from guns to bombs.

Platforms: Xbox 360, PlayStation 3, Nintendo Wii, Windows (2010)
Set during the Cold War of the 1960s, Black Ops follows the memories of a special-ops soldier under brutal interrogation. The visceral nature of the action combined with its complex Cold War narrative leave little doubt that it was designed for an adult audience.

Platforms: Xbox 360, PlayStation 3, Windows (2009)
This modern-day military shooter realistically and graphically shows violence and blood. Much of the game involves traveling to different areas of the world to take down baddies with an assortment of weapons, all played from a first-person perspective.

Platforms: Xbox 360, PlayStation 3, Nintendo Wii, Nintendo DS, Windows, PlayStation 2 (2008)
This campaign takes place through the eyes of an American soldier fighting the Japanese and a Russian battling German forces. Players can kill enemy forces with guns, grenades, rocket launchers, and flamethrowers. Besides seeing lots of blood, players will witness enemies writhing as they are burned alive or losing limbs in explosions.

Platforms: Xbox 360, PlayStation 3, Windows (2007)
The bulk of the action in Call of Duty 4: Modern Warfare takes place in the Middle East. Players step into the combat boots of two soldiers, a British SAS operative and an American Marine, as they battle the terrorists.

Platforms: PlayStation 2, PlayStation 3, Xbox, Xbox 360 (2006)
Slightly less violent than other COD games, Call of Duty 3 lets players control an infantryman marching through France after the D-day invasion at Normandy. The game features intense battles, with threats that appear out of nowhere and less than perfect cover — exposing players to sudden, bloody deaths.

Platforms: PlayStation 2, Xbox (2004)
In this violent WWII shooter, players are cast as soldiers fighting with Allied powers against the growing Nazi threat. Archival footage of the war and an authoritative voice-over infuse a degree of gravitas to what is otherwise a relentless exercise in shooting and killing.

, Devices: iPhone, iPod Touch, iPad (2011)
Black Ops Zombies, like the video game, is a march of violence, though the app is less graphic due to visual restrictions of the platform. Its mild offensive language, scenes of horror, and violence make it best for mature players only.

50 Books All Kids Should Read
Print the list for your home or library and check the books off as you go!

As Common Sense Media’s parenting editor, Caroline helps parents make sense of what’s going on in their kids’ media lives. From games to cell phones to movies and more, if you’re wondering “what’s the right age for…?”.e your thoughts

Call of Duty is completely over criticized on this website. There isn’t tons of blood like this review hints at, only small amouts tgat appear every once in awhile when a human charater is shot. The only reason I would say tweens should play COD is because of the campaign. The thing is, no-one really plays that, and most mature teens 13-14+ are compleatly able to handle the content in these games. I would rate most cod games 12+ if it wern’t for the campaign. I will end telling you that most teens should be allowed to play these games. 13+