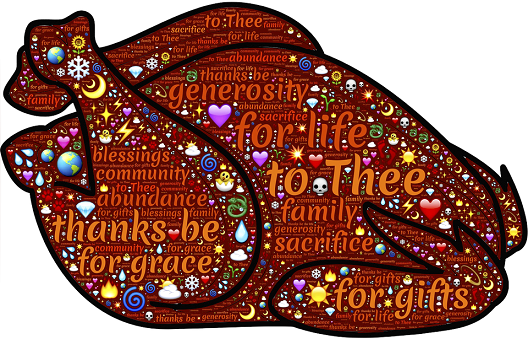 Don’t you hate those dreams where there’s lots of food around but you never seem to get a chance to enjoy any of it?

I used to have dreams like that all the time. Actually I still do! But my dream last night caused me to wake up mad! GGGRRR …!

Why? Because in my dream I had prepared a feast! There was about 100 people sitting at the table waiting to be served this delicious food. It seemed like it was supposed to be a Thanksgiving meal. In my mind there were roast turkey slices on a platter or something.

My husband for some reason disappeared. Where did he go? He was supposed to help! GGGRRR …!!

So I start serving the guests. I don’t know why but I went around putting what looked like pumpkin pie slices on everybody’s plate.  Just to get them started eating I guess.  (O.o)

Anyway, I could tell the older folks wanted some real food and were starting to wonder when they would be served. I turned around and on this long table behind there were like boxes and inside the boxes were several dinners in like take-out boxes. You know like when you go a restaurant and order food to go and they put it in those white boxes (or foam food containers). The food looked like it came from a Chinese restaurant. In other words, my turkey had disappeared. Instead there was chop suey! Which is not even Chinese! Duh!

So I just took each box and gave out as many as there were, but it wasn’t enough for everybody to be served. All of a sudden, my husband reappears. Yeah right. Now you show up?!! To do what??!! The dinner is a total disaster! GRRRR … !!!

There’s not enough food for everybody! The kids were angry because they don’t even like the dessert! The adults were upset because some of them got food and some of them didn’t.

At that point, I am fuming. Livid!  This is the worse dinner party ever!!

So I did the only thing that a person could do in a situation like that.

* Sharing a little foodie humor.  Hope you liked this post.