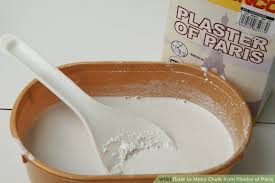 Plaster of Paris (POP) is chemically hemihydrates of calcium sulfate (Ca SO41/2 H2O). It is produced by calcination heating of gypsum, a di-hydrate of caocium sulfate (Ca SO42 H2O). It has applications in construction industry, ceramic industry, sculptures, chalk pieces, medical (dental and surgical) etc. Most of the units producing POPs are in small scale sector with capacity ranging 10-20 TD, only a small number of units are in large scale sector 100-200TD.

POP units use both thermal (wood, coal and diesel) and electrical energy for the production of POP(Plaster Of Paris).The electricity consumption is only 5% of total energy used thus the cost of producing POP depends on the cost of thermal energy, which is increasing every month. On an average a rotary kiln calciner uses about 300 kg of wood per ton .The monthly average energy consumption is of the order of 15000 kWh per ton. Since energy used is in thermal form, it makes sense to use concentrating solar power technology to generate required process heat. Maximum numbers of POP manufacturing units are based in western Rajasthan.

This region has clear sun shine for about 300-320 days in a year. Solar resource map show that this region receives more than 6 kWh per day, which shows suitability of the site. The Indian CST industry has developed good expertise to tap the solar thermal energy with 40 to 70% efficiency, using tracking type concentrators.

If we assume efficiency of collection as 60% then each meter square of concentrator will generate around 4 kWh in a day with dual axis true parabolic concentrators. Even a fixed focus Scheffler dish can generate about 40 kwh in a day. Salman and Khraishi studied the decomposition of lime and gypsum using solar energy. Narendra et al proposed use of solar energy in calcininggypsum, however, actual experiments were simulated with electrical energy. Present paper reports results of experiments done to calcine gypsum for production of POP using a commercial parabolic solar concentrator of 4 sqm and a proposed commercial method for production of POP using solar thermal energy.

The aims and objectives of the study work include the following:

In the early period of 1600s century Egyptians discovered the extraction of plaster of Paris from gypsum, while later on the Greeks started the use of this plaster of Paris for their construction purposes basically in their tombs and homes construction. The first scientific study on plaster was realized in 1768 by a French scientist named Lavoisier. In 1887,

Le Chatelier (2007), another prominent French scientist, was the first to study the hydration mechanisms of plaster. And then, plaster gradually became a fascinating research subject for scientists. In ancient India and China, renders in clay and gypsum plasters were used to produce a smooth surface over rough stone or mud brick walls.

History seems to indicate that, despite the name, plaster of Paris was invented by the Egyptians. It was used as an artistic decoration in many Egyptian tombs, and the Greeks picked up the technique, using plaster in their own homes, temples, and works of art. Paris became synonymous with this type of plaster in the 1600s, the large deposit of gypsum made it easy to produce plaster of Paris. The substance was also used extensively in fireproofing; giving Parisian homes a distinctive appearance.

Plaster decoration was widely used in Europe in the middle Ages where, from the mid-13th century, gypsum was used for internal and external plaster. Hair was employed as reinforcement, with additives to assist setting or plasticity including malt, urine, beer, milk and eggs. In the 14th century, decorative trowelled plaster, called pargeting was used in South-East England to decorate the exterior of timber-framed buildings. This is a form of incised, molded or modeled ornament, executed in lime putty or mixtures of lime and gypsum plaster. During this same period, terracotta was reintroduced into Europe and was widely used for the production of ornament. In the 1700’s, Paris was already the “capital of plaster” (“Plaster of Paris”) since all the walls of wooden houses were covered with plaster, as a protection against fire.

Artists use plaster of Paris to create sculpture, make decorative items and as a painting surface. The Greeks and Romans used plaster to create replicas of their more famous artworks. The Egyptians perfected plaster casting methods and used them to make casts of the heads of the dead in order to recreate their likenesses. The use of finely ground gypsum plaster to create decorative molding was popular during the 18th and 19th centuries.

Painting in fresco is the process of painting on a thin layer of wet plaster of Paris. A well known example of fresco work is Michelangleo’s ceiling in the Sistine Chapel.

Plaster of Paris trim, medallions and friezes etc are used to bring a touch of old-world class, modern patterns & customized artwork to transform the plain ceilings/walls into desired designs to add value and sanctity to the building. Ceiling medallions made of plaster and wood were common accents in government buildings and upper class homes centuries ago.

According to house (learners dictionary of American English 2016) defines Plaster of Paris as a white powdery substance used as a base for gypsum plasters and as a material for mixing with water to make fine or decorative casts.

According to concise English dictionary,it defines it as a hard plaster produced when mixed with water: a fully hydrated form of calcium sulphate.

Etymology: 15th century: from medieval Latin plastrumparisiense, originally made from the plaster of Paris (gypsum).

The plaster of Paris, is a white binder produced from gypsum by removing water of crystallization .This is done by heating the raw gypsum at temperatures of the order of 120-180℃. This removal of water is described by equation [1]

2.1.2    Advantages and Disadvantages of Plaster of Paris

Advantages of Plaster of Paris

Disadvantages of Plaster of Paris

According to Narenda Kumar (2013); states that the gypsum is a mineral available all over the world, it is also produced as a byproduct of fertilizer industry. In India the largest deposits are in Rajasthan followed by Tamilnadu, Jammu, Gujrat,UP, MP and West Bengal. The gypsum is used in the manufacture of hydraulic cements, ammonium sulfate fertilizer, sulphuric acid, and reclamation of acidic soil for agricultural purpose. Chemically gypsum is CaSO4.2H2O, and has a molecular weight of 177.17

S.N Sami Sameer 2013: views Plaster of Paris as core raw material used for the making of Plaster of Paris Tile, Boarders, Trims, Medallions and Misc Made ups. It is a sculpting material with a variety of decorative and practical applications. Plaster of Paris is inexpensive and simple to work with. It can be used to decorate a finished product with paint or embellish it with beads, stones and wire.

Common uses for plaster of Paris include making castings for other artistic mediums, creating sculptures and making home décor objects. The Plaster of Paris is used in the following fields,

According to Narenda Kumar (2013); states that the gypsum is a mineral available all over the world, it is also produced as a byproduct of fertilizer industry. In India the largest deposits are in Rajasthan followed by Tamilnadu, Jammu, Gujrat,UP, MP and West Bengal. The gypsum is used in the manufacture of hydraulic cements, ammonium sulfate fertilizer, sulphuric acid, and reclamation of acidic soil for agricultural purpose. Chemically gypsum is CaSO4.2H2O, and has a molecular weight of 177.17

Plaster of Paris is produced from Gypsum, which is a naturally occurring crystal of calcium sulphate (CaSO4.2H2O). Gypsum is created from the evaporation of sea water that is trapped in

lagoons of subsoil and is usually found in mountains. The impure gypsum (that it is found in the subsoil) can have different color variations, such as grey, brown or red. The pure however plaster color is white. It can be quarried in different parts of the world in slightly different forms. Plaster is made from gypsum by grinding it to powder and then gently heating it to drive off some, or all, of the water of crystallization.

Chemically, Plaster of Paris is calcium sulphate having molecular formula CaSo4½H2O. It is a white hygroscopic powder very slightly soluble in water particularly at high temperature. It is widely used in the manufacture of models in pottery industry, for making ornamental castings, plaster boards and chalk crayons, etc. Other uses of this cheap commodity are for building decoration as wall plaster and floor cement and dentist plaster. It is also used as orthopedic plaster in surgery for setting of broken bones, etc.

According to ACI Code 2.2, a structural element with a ratio of height-to-least lateral dimension exceeding three used primarily to support compressive loads is defined as column. Columns support vertical loads from the floor and roof slabs and transfer these loads to the footings. Columns usually support compressive loads with or without bending. Depending on the magnitude of the bending moment and the axial force, column behavior will vary from pure beam action to pure column action.

Column, pillar used in building to support the superstructure of a building and, also, occasionally as a freestanding monument. Columns may be circular or polygonal in cross section and are at least four times taller than they are wide. The first columns appear to have been constructed from tree trunks or bundled reeds.

Columns are occasionally used in modern architecture, but they are constructed of materials such as steel and reinforced concrete or masonry and stone, and are usually undecorated and strictly functional.

In classical architecture a column consists of a shaft, which usually rests on a base and is surmounted by an enlarged section known as a capital. The capital forms a visual and structural transition between the vertical shaft and the horizontal wall of masonry, the entablature, under the roof. In most cases several columns are placed in line so as to form a colonnade.