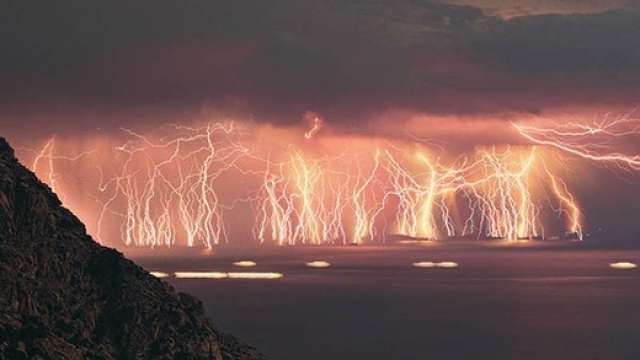 These places keep scientists searching for answers and the rest of us astounded by the secrets and mysteries the world continues to reveal.
Around the world » , some sort of mysterious activity is going on daily.
They keep scientists searching for answers and the rest of us astounded by the secrets and mysteries the world continues to reveal.
So, when people try to convince you there’s nothing new under the sun, direct them to this article.
1. Relampago del Catatumbo, Ologa, Venezuela
The southwestern corner of Lake Maracaibo in Venezuela has the world’s highest frequency of lightning activity.
More than 200 nights per year, with peaks in May and October, lightning flashes fill the sky. Sometimes 25 or more flashes per minute. To put that in perspective: The National Weather Service classifies anything over 12 strikes per minute as “excessive.” Named for the Catatumbo River, which flows from Colombia into Lake Maracaibo, the Relampago de Catatumbo, or Catatumbo Lighting, has become a highlight for travellers who spend their nights wide awake and wide-eyed watching the spectacle.
2. Longyearbyen, Norway
From April 20 to August 23, the sun never sets over Svalbard, a Norwegian island that lies north of Greenland in the Arctic Sea.
This phenomenon plays havoc with everyone’s body clocks.
3. Magnetic Hill, Moncton, New Brunswick
The Magnetic Hill is an example of a gravity hill, a type of optical illusion created by rising and descending terrain. It is located at the northwestern edge of the city of Moncton in the Canadian province of New Brunswick.
To experience Magnetic Hill today, drivers must pay a fee to drive their cars to the end of the road. When a car is placed in neutral, it will begin to roll backwards, apparently uphill. Observers will also note that water in the adjacent drainage ditches also seemingly runs “uphill.”
4. Surtsey, Iceland
Before 1963, the Icelandic island of Surtsey didn’t exist. Then, an underwater volcano in the Westman Islands (Vestmannaeyjar) erupted, and when the activity settled down in 1967, what remained was an island where no island had been before.
5. Eternal Flame Falls, New York
Behind the cascade of a small waterfall in the Chestnut Ridge Park in suburban Buffalo, New York, visitors are treated to a flickering golden flame. Fueled by what geologists call a macroseep of natural gas from the Earth below. A geological fault in the shale allows about 1 kilogram of methane gas per day to escape to the surface, where, at some point, possibly the early 20th century, a visitor had the idea to set it alight and it’s been burning ever since.