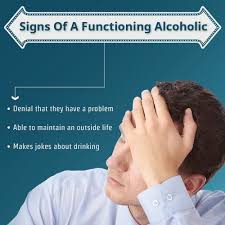 It’s often difficult to recognize an alcoholic, as most of them can, at least superficially, carry out their everyday responsibilities. Maybe they’re even members of our families. The high-functioning alcoholics are very adept at concealing their alcoholism from others, even from themselves. However, the signs are there. You just have to search for them.So what exactly is a high-functioning alcoholic?

To function is to be able to carry out specific actions or activities, to operate or to work. High-functioning alcoholics, then, can convincingly deal with their prescribed roles and carry out their daily duties – yet they are addicted to alcohol. They can maintain their relationships with their family, friends, and coworkers, keep up with their jobs and hobbies. In essence, they live a double life: they are outwardly the successful, capable husbands, wives, siblings, sons, daughters, friends, or coworkers, while inside they are suffering from alcoholism.

High-functioning alcoholics have the same disease with skid-row drunks, but they follow a different progression. With their unique high level of denial, the first often find it extremely difficult to admit that they even drink too much. Through years of success and achievement – in spite of their drinking issue – the HFA isn’t defined as an alcoholic by others.

Also, due to the stigma and shame that’s still associated with alcoholism, the HFA would hate to admit to others, let alone themselves, that they have a problem with alcohol. Their personal denial makes others unable to realize that this person is indeed alcoholic.

Since they can’t admit that they are alcoholics, HFAs are likely to remain undiagnosed. Also, they are often the last to look for treatment for their disease.

Here are 13 warning signs and symptoms of HFAs:

1) The HFAs usually surround themselves with others who like to drink.

This assimilation makes it hard to pick out the HFA from the rest drinkers. Besides, the HFA actually enjoys drinking and being around other drinkers.

2) They are obsessed with alcohol.

The thought of alcohol is always on the mind of the HFA. They are always counting hours until the next drink and calculating how much alcohol can be consumed without any outward signs of drunkenness.

3) One drink is never enough.

Their lure is too strong; the craving consumes the HFA until they can have their next drink – and then the next, and the next. Soon the HFA will lose control over total alcohol intake – although they still might appear outwardly in control. After all, they are masters of concealment.

4) Alcohol is part of their lives.

The HFA would rather give up their identity than alcohol. Alcohol is so much a part of their lives that they can’t imagine a life without alcohol.

5) They usually finish drinks of others.

If someone leaves a drink on the bar or the table, the HFA might pick it up and finish it, “so that it doesn’t go to waste.” If a family member or friend doesn’t touch their drink, the HFA usually drinks it along with their own.

6) They experience shame over drunken behavior.

The HFA does often feel remorse and/or shame over situations where their behavior became sloppy after drinking. Such behavior is not part of their carefully crafted image and they consequently try even harder to avoid such mistakes in the future. However, they won’t quit drinking.

Some HFAs only drink expensive wine or liquor fooling themselves that this means they’re not alcoholics. It’s a self-delusion that lets them continue to drink with impunity.

8) They fit life into compartments.

Another familiar sign of HFAs is that they’re able to conveniently separate their drinking issue from the rest of their existence. Who they are at home, on their jobs, or to casual acquaintances is entirely different from their drinking routine.

At some point, the HFA might have tried to quit drinking but failed. This pattern might often be repeated, but still, the HFA refuses to seek medical treatment. It’s part of their personality makeup and their self-constructed identity that they believe they can handle their drinking problem on their own. Such refusal to get help is hard to overcome.

10) They find excuses to reward themselves with a drink.

An HFA feels they work hard and deserves a drink as a reward. Drinking, to them, is both an excuse and a reward. The HFA might even use those words in defense of their actions – to themselves and to others.

When others are going to be around, the HFA might sneak a drink early, drink before going out, or drink on their own. Such secrecy is part of their concealment of their true problem. They have to get in the drinking but won’t risk of others finding out or suspecting their real problem.

12) Emotional and physical consequences don’t matter to the HFA.

Whether minor or severe, the consequences of drinking don’t make a difference to the HFA. They will continue to drink, regardless. It’s only when things get really out of control that the HFA might seek help for the problem.

13) They suffer from blackouts, memory losses, or worse.

At the end of the HFA’s downward spiral, blackouts, memory losses, and other physical, emotional, psychological, social and even legal problems intensify. It is at this point that the HFA either gets treatment or keeps on deteriorating.

Risk Factors for Becoming an HFA

Research studies have shown several risk factors that contribute to a person becoming an alcoholic, HFA or otherwise. Those include, but aren’t limited to, the following:

1) Drinking at an early age, for example before the age of 15

7) Other substance abuse (such as cigarettes, street or prescription drugs)

How to Approach an HFA about Treatment

Family members or close friends might try to convince the HFA that treatment is essential, but they first have to overcome the HFA’s obstinate denial and resistance. Remember, the HFA has been able to conceal their alcoholism for years. It won’t be easy for them to admit they have a problem they can’t resolve themselves.

If you recognize the signs and symptoms, you’ve gotten past your own denial. It’s often tough for those closest to the HFAs to see the signs of alcoholism – even when they have been present for years.

Addiction experts say it’s crucial to let the HFA know how much their drinking behavior hurts you. Never approach them when they’ve been drinking or when they are suffering from the aftereffects of drinking. Wait until they are completely sober. It is also essential that the conversation is not defensive. Start by stating how you’d like things to be and emphasize your emotions and concerns. Expect the HFA to deny the issue. You could then talk about how many people can function at home or work and still be alcoholics. Denial might still – and probably will – occur. But be prepared to show tangible evidence of alcohol-related issues. Such documentation is possibly the only proof that will convince the HFA that there could be a problem with their drinking that needs addressing. However, avoid confrontation and conflict, as this won’t solve the problem.

You will also need resources to do this. Check out the assessment tools, tips on cutting back, treatment referrals and services at the NIAAA site. For instance, at-risk or heavy drinking involves consumption of more than four drinks per day or fourteen per week for men and three drinks per day or seven per week for women. Look through the FAQs for answers to the most common questions about alcoholism. Professional help to quit drinking might involve medications, alcohol counseling, or specialized intensive treatment programs. Also, on the NIAAA site you can download the NIAAA booklet Rethinking Drinking: Alcohol and Your Health.

13 Signs That Someone Is A High-Functioning Alcoholic