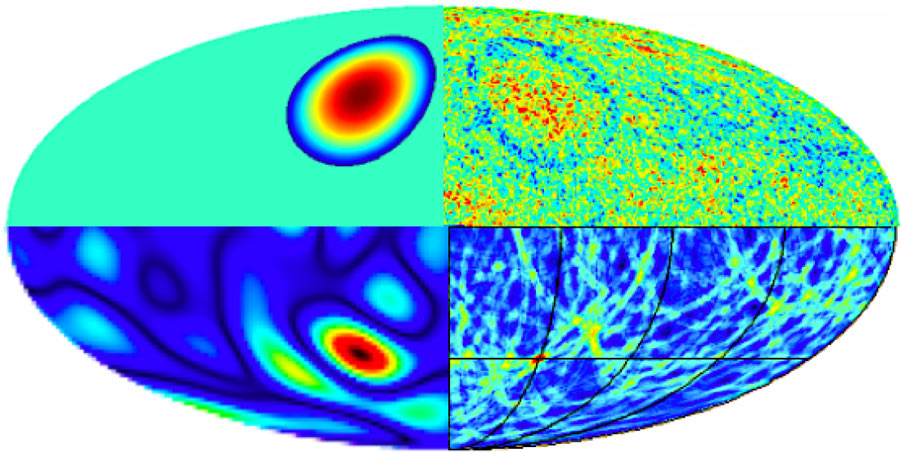 ××he Universe Is Old (Really Old)

he universe began with the Big ang, and is estimated to be pproximately 13.7 billion years old

stronomers calculated this figure by easuring the composition of matter nd energy density in the universe, hich enabled them to determine ow fast the universe expanded in he past. As a result, researchers ould turn back the hands of time nd pinpoint when the Big Bang ccurred. The time in between that xplosion and now makes up the age f the universe

×× he Universe Is Getting Bigger

n the 1920s, astronomer Edwin ubble made the revolutionary iscovery that the universe is not tatic, but rather is expanding. But, it as long thought that the gravity of atter in the universe would slow his expansion or even cause it to ontract.

hile dark energy is thought to be he strange force that is pulling the osmos apart at ever-increasing peeds, it remains one of the reatest mysteries in science ecause its detection remains lusive to scientists.

×× he Universe’s Growth Spurt Is ccelerating

ysterious dark energy is not only hought to be driving the expansion f the universe, it appears to be ulling the cosmos apart at ever-ncreasing speeds. In 1998, two eams of astronomers announced hat not only is the universe xpanding, but it is accelerating as ell. According to the researchers, he farther a galaxy is from Earth, the aster it is moving away.

he universe’s acceleration also onfirms Albert Einstein’s theory of eneral relativity, and lately, cientists have revived Einstein’s osmological constant to explain the trange dark energy that seems to be ounteracting gravity and causing he universe to expand at an ccelerating pace. [Full Story]

hree scientists won the 2011 Nobel rize in Physics for their 1998 iscovery that the expansion of the niverse was accelerating.

×× he Universe Is Filled With Invisible tuff

he universe is overwhelmingly made p of things that cannot be seen. In ct, the stars, planets and galaxies hat can be detected make up only 4 ercent of the universe, according to stronomers. The other 96 percent is ade up of substances that cannot e seen or easily comprehended.

hese elusive substances, called ark energy and dark matter, have ot been detected, but astronomers ase their existence on the ravitational influence that both exert n normal matter, the parts of the niverse that can be seen

×× he Universe Could Be Flat

he Universe Has Echoes of Its Birth

made up of light echoes left over om the Big Bang that created the niverse 13.7 billion years ago. This lic of the Big Bang explosion hangs round the universe as a pocked veil f radiation.

he European Space Agency’s lanck mission mapped the entire ky in microwave light to reveal new lues about how the universe began. lanck’s observations are the most recise views of the cosmic icrowave background ever btained. Scientists are hoping to se data from the mission to settle ome of the most debated questions

cosmology, such as what appened immediately after the niverse was form seen

×× here May Be More Universes

he idea that we live in a multiverse,

which our universe is one of many, omes from a theory called eternal flation, which suggests that shortly fter the Big Bang, space-time xpanded at different rates in different laces. According to the theory, this ave rise to bubble universes that ould function with their own eparate laws of physics.

he concept is controversial and had een purely hypothetical until recent tudies searched for physical arkers of the multiverse theory in e cosmic microwave background, hich is a relic of the Big Bang that ervades our universe. [Full Story]

Vital Hidden Things About Google You Don’t Know, despite The Fact That You Are A Net Literate

The Term CONFUSION, Causes And What It Causes