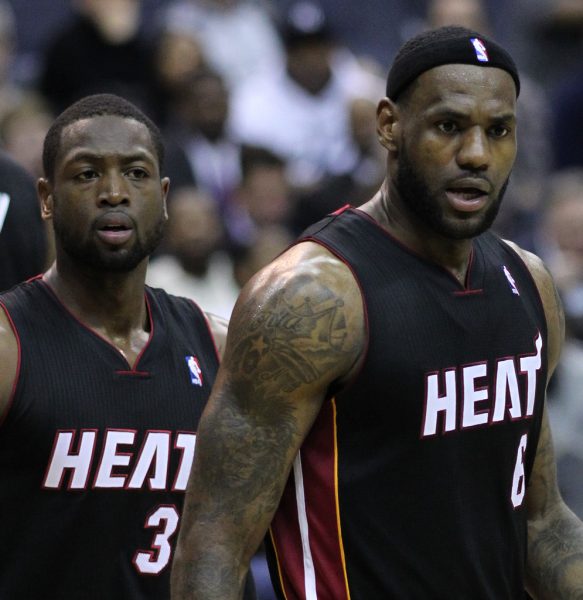 Where are the duo headed? There’s been a lot of talk about Lebron James and Dwyane Wade possibly headed to the Los Angeles Lakers. Certainly Lebron seems fitting but what about Wade? It appears as though wherever Lebron goes Wade must tag along. They’re like twins huh? Could there really be extensive talk between Magic Johnson, Dwyane Wade, and Lebron James? Private meetings should be held in order to keep the confidentiality. The contracts would certainly be discussed and yes Wade would more than likely take a pay cut. “DWADE Shouldn’t accepted the contract with the Miami Heat but there must be the moving on.” By: (Tanikka Paulk).

Imagine the two playing for the Lakers. If an NBA wants to continuing enjoying his craft then he would accept such a deal. Yes Lebron and Wade can bring some hype the L.A. What are fans saying about the talk? Some seem to agree with the duo playing on the Los Angeles court. The Miami rumors were just that. Wade had his opportunity to play once again with the “Miami Heat” but decided to play at Chicago. Wade always wanted to play for the Chicago Bulls and he did had a good contract but is now looking for a new NBA home. Relocation possibilities. Dwyane Wade spent 13 seasons with the Miami Heat. Miami was like Wade’s second home or perhaps home. Yes Lebron would fit in with the “Los Angeles Lakers” and once Wade enters the court the two will look smitty (made up word by: (Tanikka Paulk). together. It seems as though the two are like identical twins. Fans would line up to purchase the jerseys. The ticket sales could increase and there could be more traffic in Los Angeles. The purchasing of homes there but once the retirements occur then there could be the sales of the homes.

The fans will have to wait and see what the decisions are. Magic Johnson is a great communicator and knows basketball business and business in general. The organization could flourish with such a decision and DWADE really wants to play want he’s always enjoyed. “Basketball.” The two ballers seem to really enjoy one another’s company. Close friends could be an understatement. Reminds me=Tanikka Paulk of the song by Michael Jackson. “Hold my Hand.”

The two once played together with the Miami Heat there was also Chris Bosh and Udonis Haslem. The continued dreams of basketball. What kind of “shoes” would the duo wear on the court? They’ll be suited up wherever the semi twins arrive to. Fans could be on the edge of their seats awaiting the news regarding where the ballers are headed. Lebron and Wade fans would have to get use to new uniforms if their transformations are to occur.