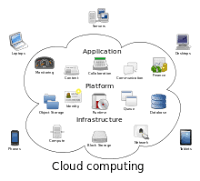 A good starting point for a definition of cloud computing is the definition issued by the U.S. National Institute of Standards and Technology (NIST) September, 2011. It starts with:

Before getting to the essential characteristics, service models, and deployment models of the cloud model mentioned at the end of the definition, let’s pause for a moment and consider this first part of the first sentence. It mentions a shared pool of configurable computing resources. This aspect of Cloud Computing is not new. In fact, it is fair to draw a direct line from time-sharing—that was initiated in the late 1950s and saw significant growth in the 1960s and 1970s—to today’s Cloud Computing. Adding to that, however, is the essential characteristic of Cloud Computing known as elasticity. The second part of the first sentence alludes to elasticity by stating there are computing resources … that can be rapidly provisioned and released with minimal management effort or service provider interaction. (We’ll get to service provider later.)

The end of the first sentence of the definition mentions a service provider. In Cloud Computing, the elastic computing resources are used to provide a service. It is unclear how rigorous we should view the term service in this definition. Nevertheless, Cloud Computing is very much involved with the software engineering term service. A service is the endpoint of a connection. Also, a service has some type of underlying computer system that supports the connection offered (in this case the elastic computing resources). See: