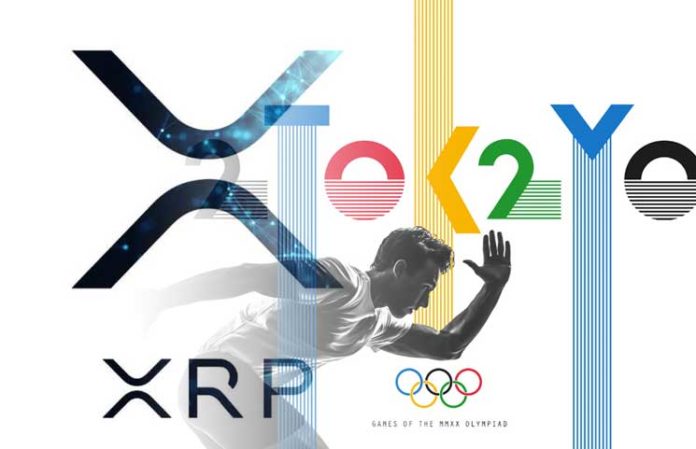 Just after the Swell conference of Ripple, another good news about Ripple was reported, that is Ripples currency-XRP may be used as the official digital currency of the 2020 Tokyo Olympic Games.

Ten months ago, Ken Takahashi, a former Japanese baseball player initiated a petition to use XRP as the official digital currency of the 2020 Tokyo Olympics. It is reported that the petition requires a total of 7,500 signatures. As of October 8, the petition has been signed more than 8,200.

Ken Takahashi said that XRP coins have the potential to solve many logistical problems for large international sports events, especially those related to foreign exchange. Mr. Takahashi proposed a system that uses XRP coins. With this system, the yen will not face tremendous pressure during major international sports events. Takahashi initiated the petition because people had encountered difficulties in foreign exchange tensions in the past few major events.

Part of the petition wrote:”When tourists flooded into Japan, the demand for local currency soared, leading to a long queue of foreign exchanges, which occurred during previous events such as the 2008 Beijing Olympics and the 2016 Rio de Janeiro Olympics. The chaotic exchange rate and language barriers have further complicated the problem. We believe that Ripple Lab’s cryptocurrency XRP can quickly complete transactions and security, and this cryptocurrency will solve foreign exchange problems. Make a significant contribution.”

At the same time, Ripple announced a series of development projects, especially in Japan recently launched a blockchain remittance platform, MoneyTap, which was jointly built by Ripple and SBI Holdings. Mr. Takahashi’s plan will allow XRP coins to replace the yen and become the real currency during the Olympics. People from all over the world can use the cryptocurrency payment system to purchase goods and services during the Olympics. This is why platforms like MoneyTap come in handy.

Since the Olympic Village can generate a large number of small transactions, if the petition is approved, the liquidity of the XRP and ripple market value may reach a record level. As the third-ranked cryptocurrency, XRP coins have been seeking opportunities for rapid expansion and acceptance by various institutions in order to improve their effectiveness in real-world transactions. Once this petition is successful, this will be an important milestone for Ripple’s expansion and the ripple value will increase dramatically.