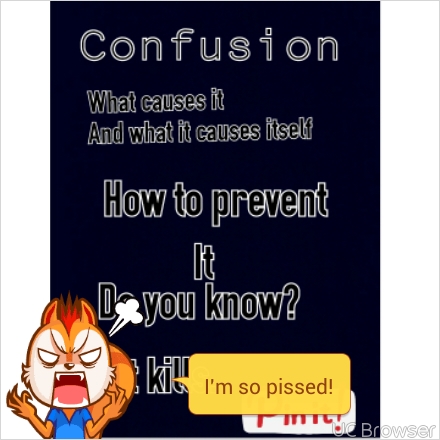 What is confusion? “to pour together;” “to mingle together;” “to confuse”) is the state of being bewildered or unclear in one’s mind about something.

The term “acute mental confusion” is often used interchangeably with

delirium ,in the International Statistical Classification of Diseases and Related Health Problems and the

Medical Subject Headings publications to describe the pathology . These refer to the loss of orientation, or the ability to place oneself correctly in the world by time, location and personal identity. Mental confusion is sometimes accompanied by disordered

consciousness (the loss of linear thinking) and memory loss (the ability to correctly recall previous events or learn new material).

Let’s see if we can figure out what’s causing your confusion.

Confusion may result from drug side effects or from a relatively sudden brain dysfunction. Acute confusion is often called delirium (or “acute confusional state”),  although delirium often includes a much broader array of disorders than simple confusion. These disorders include the inability to focus attention; various impairments in awareness; and temporal or spatial dis-orientation. Mental confusion can result from chronic organic brain pathologies, such as dementia, as well.

Alcoholism= What Is Alcoholism?

Alcoholism is also known as alcohol dependence and alcohol use disorder. It occurs when you drink so much that your body eventually becomes dependent on or addicted to alcohol. When this happens, alcohol becomes the most important thing in your life.

People with alcohol dependence will continue to drink even when drinking causes negative consequences, like losing a job. They may know that their alcohol use negatively affects their lives, but it’s often not enough to make them stop drinking.

Some people may drink alcohol to the point that it causes problems, but they’re not physically dependent on alcohol. This is sometimes referred to as alcohol abuse.

CONCUSSION What is a concussion?

A concussion is a mild traumatic brain injury (TBI). It can occur after an impact to your head or after a whiplash-type injury that causes your head and brain to shake quickly back and forth. A concussion results in an altered mental state that may include becoming unconscious.

Anyone can become injured during a fall, car accident, or any other daily activity. If you participate in impact sports such as football or boxing, you have an increased risk of getting a concussion. Concussions are usually not life-threatening, but they can cause serious symptoms that require medical treatment.

A concussion is different from a contusion. A concussion specifically affects your brain, but contusions are bruises. Contusions can occur on your head, but they aren’t typically serious and tend to resolve within several days..

Description of Confusing Cause and Effect

Confusing Cause and Effect is a fallacy that has the following general form:

1. A and B regularly occur together.

This fallacy requires that there is not, in fact, a common cause that actually causes both A and B.

This fallacy is committed when a person assumes that one event must cause another just because the events occur together. More formally, this fallacy involves drawing the conclusion that A is the cause of B simply because A and B are in regular conjunction (and there is not a common cause that is actually the cause of A and B). The mistake being made is that the causal conclusion is being drawn without adequate justification.

In some cases it will be evident that the fallacy is being committed. For example, a person might claim that an illness was caused by a person getting a fever. In this case, it would be quite clear that the fever was caused by illness and not the other way around. In other cases, the fallacy is not always evident. One factor that makes causal reasoning quite difficult is that it is not always evident what is the cause and what is the effect. For example, a problem child might be the cause of the parents being short tempered or the short temper of the parents might be the cause of the child being problematic. The difficulty is increased by the fact that some situations might involve feedback. For example, the parents’ temper might cause the child to become problematic and the child’s behavior could worsen the parents’ temper. In such cases it could be rather difficult to sort out what caused what in the first place.

In order to determine that the fallacy has been committed, it must be shown that the causal conclusion has not been adequately supported and that the person committing the fallacy has confused the actual cause with the effect. Showing that the fallacy has been committed will typically involve determining the actual cause and the actual effect. In some cases, as noted above, this can be quite easy. In other cases it will be difficult. In some cases, it might be almost impossible. Another thing that makes causal reasoning difficult is that people often have very different conceptions of cause and, in some cases, the issues are clouded by emotions and ideologies. For example, people often claim violence on TV and in movies must be censored because it causes people to like violence. Other people claim that there is violence on TV and in movies because people like violence. In this case, it is not obvious what the cause really is and the issue is clouded by the fact that emotions often run high on this issue.

While causal reasoning can be difficult, many errors can be avoided with due care and careful testing procedures. This is due to the fact that the fallacy arises because the conclusion is drawn without due care. One way to avoid the fallacy is to pay careful attention to the temporal sequence of events. Since (outside of Star Trek), effects do not generally precede their causes, if A occurs after B, then A cannot be the cause of B. However, these methods go beyond the scope of this program.

Vital Hidden Things About Google You Don’t Know, despite The Fact That You Are A Net Literate

Some Hidden Things About The Universe

All causal fallacies involve an error in causal reasoning. However, this fallacy differs from the other causal fallacies in terms of the error in reasoning being made. In the case of a Post Hoc fallacy, the error is that a person is accepting that A is the cause of B simply because A occurs before B. In the case of the Fallacy of Ignoring a Common Cause A is taken to be the cause of B when there is, in fact, a third factor that is the cause of both A and B.