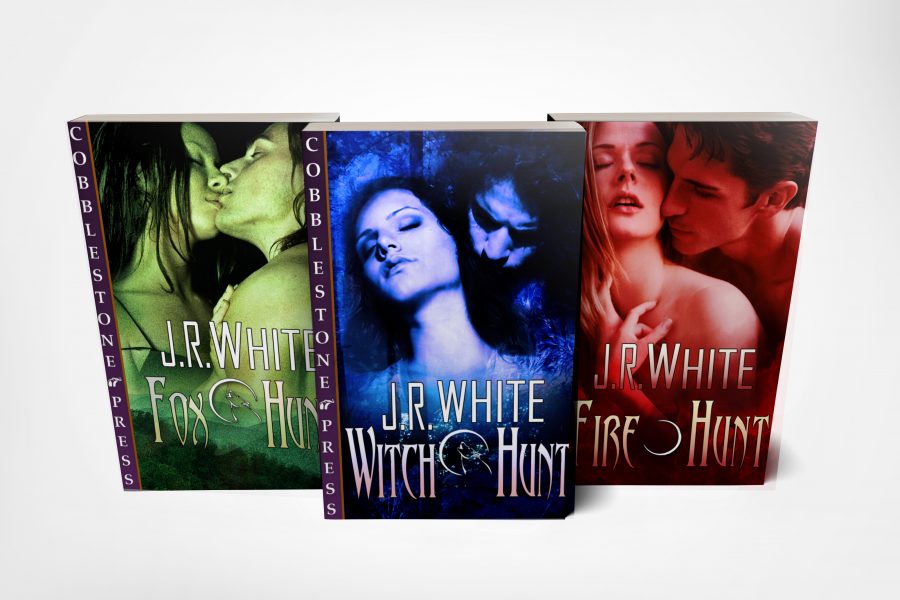 Back in 2013 my first novel, Witch Hunt, was accepted by a small press, Cobblestone Press. It would only be released as an ebook, but it was my first publishing contract and I felt great about it. It led to Fox Hunt being published in 2014 and Fire Hunt followed in 2015. All ebooks and all products of intent writing while caring for a baby and later a toddler.

Last weekend Cobblestone Press got in touch wanting to send the Saving Grace Saga to print. I was so excited and still am. While Witch Hunt was up for a contract renewal I was starting to work on a secondary plan, but I have a handful of projects that take up my time and having my publisher handle the print is going to free up any time I would have to devote. There is still marketing and spreading of the word, but this allows for both my new projects and the stories going into print. A book you can hold seems to mean so much more than a book on a tablet or phone.

If you’re interested in reading any of the titles you can find them on the Cobblestone website.

After the bloody murder of her brother, Rei finds herself on the run from the coven that killed him. A powerful Earth witch, Rei searches for a natural well of magic to avenge her brother’s death, even if it costs her life. However, standing between her and her goal is an alluring wolf.

Aidan never took the time or interest to look for his mate, but when the young witch shows up on pack hunting grounds his solitary life is turned upside down. Now, he must find a way to protect his pack and the woman that fate has handed him.

Living a nomadic lifestyle, Dilly is accustomed to being on the move, but the Federal Witch Hunters are after more than broken wands. Now they’re hunting for wolf pelts, and Dilly and her family are in their sights. Dilly must choose to charge to her family’s rescue or rely on a man she just met.

Leader of his werewolf bloodline, Mike travels across the country in search of a family traveling through the Southern Appalachian Mountains. Finding his mate in the headstrong Dilly, Mike is faced with the possibility of war with not only the burners but his own mate.

Julia was dedicated to the cause, even though she was marked a traitor by her own kind for becoming a Federal Witch Hunter. When her partner captures a man from her past, Julia must make a choice: Let the witch be tortured, or blow her cover and go with plan B.

All Edmund wanted was to help the magical community and escape his extremist lifestyle. Instead he was setup and captured by Witch Hunters. Cut off from his magic and held prisoner, Edmund didn’t think things could get worse. Then Julia struts into his holding cell with an escape plan.