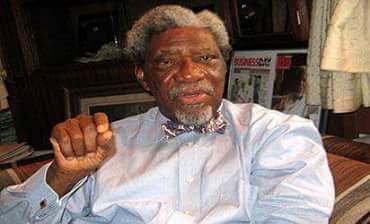 Alhaji Femi Okunnu, 84, former Federal Commissioner for Works and Housing and a true-blood Lagosian spoke extensively on the source and origin of Lagosians at [email protected] HE SAID:

There is no no-man’s land. There are always some people who are original settlers. In the case of Lagos, it’s a misnomer to say Lagos is a no-man’s land. It’s rubbish. Absolute rubbish! Lagos was peopled by the Aworis and Awori land spread from Badagry through to Ota. They settled mostly in Ikeja, a division of Lagos. The Idejo chiefs, the white cap chiefs, who are the land owning chiefs, are basically Aworis and some of them are now Obas. I’m talking about the Oniru, The Olumegbon, Aromire, Oluwa, Ojora, Oloto and a couple others.

After them, waves of immigrants, from today’s Niger State, started trooping in. I’m talking of the Tapas, the Nupes. I have Nupe blood. My father’s mother was a daughter of a Nupe man, Umoru from Idunsagbe in Lagos Island. Mind you, I’m talking of my great, great, grand-father; so you can imagine how long we’re talking about and how far our history dates back in Lagos. The Oshodi family of Lagos were originally Tapa. My wife is an Oshodi; Oyekan Oshodi. The Chief Imam of Lagos and all his great grand fathers were Tapa, owing to their vast knowledge in the Quran. Now, you would not say they are not original Lagosians because we’re talking of a history that dates back well over three hundred years.

Later we had another batch of immigrants over a period of time – those who had been taken into slavery in the North and South America and the West Indies but who had been freed following the abolition of slave trade about 170 years ago. Some of them also came in from Freetown, Sierra Leone. That’s where we have the Saro, Eko connection. They settled in the Olowogbowo area.

Then we had the Binis from Benin (present Edo State). They invaded Lagos and settled in the best part of what we now call Isale-Eko. Oba Ado and all successive kings of Lagos are of Benin. You won’t say they are not Lagosians because we are talking of hundreds of years ago.

Yes, I was coming there. The Brazilian Quarters were made up of another set of returnees: the Agustos, the Dasilva, Marinho, Pereira and their descendants, who returned from Brazil and other parts of South America. So when you talk of indigenes of Lagos. These are the people who arrived Lagos Island and environment over two hundred years ago. So there is no controversy over the indigenes of Lagos. It is complete ignorance.

The Binis took over the reign of Lagos by conquest. The Aworis were there before them. They were the original settlers. Iga Idunganran itself was a gift to Oba Ado by Oloye Aromire, a white cap chief. He owned the land that the palace occupies till today. That is why till today, we have sections of Isale-Eko with Bini connections. When you hear of Idumota, Idunsagbe, Idunmaigbo, Idun-tafa; the word idun had bini origin. And then we had some chiefs who came with King Ado. That is another wide area. But suffice to say that Obanikoro, was a medicine chief who came with King Ado; so is Ashogbon. In Bini, it is Asogbon. There is also Bajulaye, who originally was Bazuaye. So the Bini connection is very deep. As a matter of fact, the corpses of all the obas, from King Ado through to Oba Adele I, who died at about 1834, were all taken to Benin for burial. . . . .

Related Posts:
Vital Hidden Things About Google You Don’t Know, despite The Fact That You Are A Net Literate

The Term CONFUSION, Causes And What It Causes

Some Hidden Things About The Universe