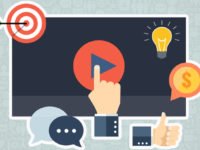 If you’re a business owner interested in video marketing and haven’t touched YouTube yet, it’s time to change that.

Whether you have a high-budget video for your ad or you’re just snapping something with your phone camera, you need to know the ropes.

If you’re wondering how to advertise on YouTube, use this step-by-step guide to get started:

Digital marketing is both cost-effective and wider-reaching compared to traditional marketing. While each has its own time and place, online marketing continues to grow.

One crucial part of it is video advertising. With YouTube being the most visited video streaming site, it makes sense to go there first.

We’ll take a look at some simple steps that will teach you how to place ads on YouTube here.

Before you begin, make sure you have a video to advertise with. At the very least, you need to have an idea or a plan for what you want it to be or who you want it to target.

We could really get into the nitty-gritty of creating a video, but just know that there aren’t too many set-in-stone rules for how to make a video for YouTube advertising.

You could hire a renowned video production company to shoot it with all the thrills and chills, or you could just get a tripod and shoot it on your own phone.

No matter what you do, it’s a good idea to have a script or a storyboard. You don’t want to be shooting blindly.

3. Set Your Campaign and Configure Your Settings

Now that your advertisement video is created and uploaded to YouTube and you have a Google AdWords account, it’s time to set up your ad campaign.

From Google AdWords, you can create your ad campaign, set the campaign type, and name it. You can have multiple campaigns running simultaneously as well.

There is a lot of customizability you have with YouTube video advertising. Some settings that you can adjust include:

We’re going to take a look at all of these a little closer.

You are only going to pay when a user views your ad for at least 30 seconds or all the way through. Considering that, you can set budget limits for how much you’re willing to spend on the campaign over a period of time.

A good recommendation is to start off small here until you’re more used to the system.

You can set your ad to appear anywhere in the world, or even as narrow as a specific zip code.

You’ll want to consider what your video is aimed at.

You can set when exactly you want your ad to appear.

For example, your ad may only appear during business hours (9 a.m. to 5 p.m.), and you can base it on specific time zones as well.

Some people have done ample research into figuring out what are the busiest and slowest times over on YouTube. You could simply have your ads run during busy times and set them off during slow times.

On the other hand, you may want to do some local research on your area or demographic if you’re releasing a more targeted ad.

For example, is your audience more likely to be watching videos late at night or earlier in the morning? Then you might want to reflect that when you set times.

Basically, you can target a specific gender or age group.

Again, this may pertain to you more if you’re targeting a more specific audience.

The topics you set for your YouTube video advertising will relate to the videos they appear in.

It isn’t necessarily the specific topic of your video, but you want to be accurate here.

If you’re making a video advertisement for your beauty and skincare company, you don’t necessarily want or need it playing during a fast-food restaurant review video.

Finally, you also have the ability to determine if your ad will be more likely to play when viewed through a mobile device.

If your audience is on the go and more likely to be on the YouTube app, then you may want to target smartphones and tablets.

Once you’ve made all of the above settings, insert the link for the video that you have already shot, created, and uploaded to YouTube.

Then, you can choose the ad campaign type. There are two major types:

In-stream ads are probably the most common ways to advertise on YouTube.

These are videos that play before or during other videos on YouTube.

In-display ads are videos that appear as advertisements on YouTube’s homepage. They may also appear within YouTube searches, or on the right-hand bar as “suggested videos” when another video is being played.

Initiate a link request from Google AdWords and then confirm it on the YouTube account where the advertisement video was uploaded.

We hope you enjoyed our step-by-step guide to YouTube video advertising. If you have any more questions or concerns, feel free to contact us at Falcon Digital Marketing!

18 Ways to Earn Money Online from Home Without Investment