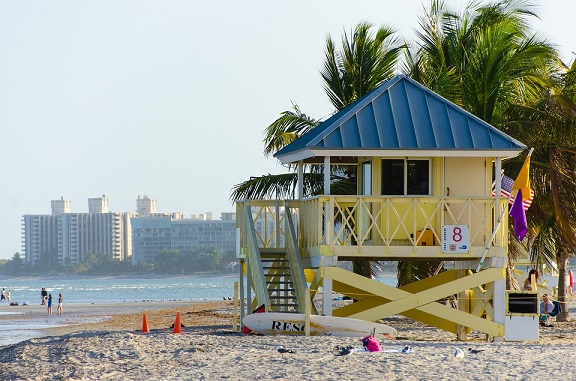 Miami, Florida. My hometown. Born and raised. Lived there all my life plus the first ten years of my marriage; for about 3 decades. What are the pluses of growing in the fabulously colorful city? Lots of cool things.  Below are just a few highlights.

~ Incredible beaches and the weather is almost always very accommodating.

~ Great food, especially the Cuban restaurants and the Jewish delicatessens.

~ Fantastic salt water fishing in Key West. Cool place to go on the weekends for lovers or for family fun. It’s 100+ miles or a drive of about a 2-3 hours, heading south.

~ Other nice cities in Florida you can drive to like Tampa, another 2-3 drive only you head north. Tampa Bay is where they hold the Bollywood Festival. Get details.

~ Lot of celebrities live on Miami Beach, such as Gloria Estefan (singer / songwriter, lead singer for the Miami Sound Machine). The notorious crime boss, Al Capone, also had a home there. Nothing to brag about. But he did move there which nobody can deny and the law enforcement authorities were not to happy about the new resident. Whatever!  He lived there from 1928 to 1947. He even died in his house. A Miami-based company purchased the property and renovated it with the intent to use it for video and audio production. The project was approved under the umbrella of “Miami Historic Preservation”. It’s impressive!

~ 90 miles from Cuba, which is good to know since President Obama decided that after 50 years, maybe the US should try establish a good relationship this country.  At least, for the record, he can say he tried.  Report of Obama’s Visit to Cuba.

~ It’s a half hour plane ride from The Bahamas. The USA has always enjoyed good relations with this country. Or instead of a plane, you take the one day cruise. Check it out!

~ Last but not least, the University of Miami located in Coral Gables, Florida (a part of Greater Miami), where I received my BBA degree in Accounting, has many famous alumni, such as Sylvester Stallone, American actor, famous for his “Rambo” and “Rocky” movies; and Grace Slick, lead singer for popular group, Jefferson Airplane. “Jefferson Airplane was inducted into the Rock and Roll Hall of Fame in 1996, and honored with the Grammy Lifetime Achievement Award in 2016.” (Wikipedia)

That’s a snapshot of my hometown. You may ask: If it’s so great, why did I leave? Job transfer. It was a practical financial decision made on behalf of my family. We left at the end of 1986 and never looked back. We relocated from Miami, Florida TO Houston, Texas TO Damascus and Gaithersburg, Maryland TO El Paso, Texas and finally TO Austin, Texas.  Absolutely no regrets. I’d do it again!  🙂

~ Featured image for this post is a picture of Crandon Park Beach; a childhood memory. 🙂

The hibiscus were flowers that grew in the yard of the house where I grew up.