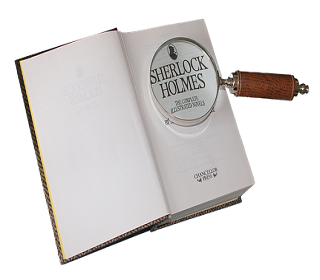 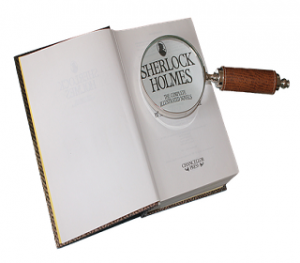 In The Adventure of the  Blue Carbuncle Sherlock Holmes comes into possession of a hat. Although Holmes does not know the owner of the hat, he provides a convincing argument, and proves that this man is an intellectual.  Dr. Watson remains disconcerted and stupefied:

“Then, what clue could you have as to his identity?”

“ But you’re joking. What can you gather from this old battered felt?”

“Then, pray tell me what it is that you infer from this hat.”

“He picked it up and gazed at it in the peculiar introspective fashion which was characteristic of him. ‘It is perhaps less suggestive than it might have been,’ he remarked, ‘and yet there are a few inferences which are very distinct, and a few others which represent at least a strong balance of probability. That the man was highly intellectual is of course obvious upon the face of it, and also that he was fairly well-to-do within the last three years, although he has now fallen upon evil days.’” …

“I have no doubt that I am very stupid, but I must confess that I am unable to follow you. For example, how did you deduce that this man was intellectual?”

“For answer Holmes clapped the hat upon his head. It came right over the forehead and settled upon the bridge of his nose. ‘It is a question of cubic capacity,’ said he; ‘a man with so large a brain must have something in it.’” …

“Your reasoning is certainly plausible.” (1).

Dr. Watson seemed satisfied with the answer from Holmes, but he really shouldn’t have been satisfied with him. Holmes did not actually provide the indisputable evidence that the hat belonged to an intellectual. Holmes merely offered Dr. Watson a convincing and plausible argument, just not a proof. Holmes’ argument is acceptable only as a deduction, but it lacks a fundamental element properly called verifiable proof, which provides authoritative confirmation of the truth-event.

Therefore, we must not be content with plausible arguments in our daily life, even if they are remarkably well structured. The situation merits closer examination, and we must demand that any assertion must be proven. So we can give credit to an argument only once we have the force of proof. It is only in this case that we will accept an argument as true. Otherwise, we do not have any reason to believe that an argument could be true, and we must refuse to endorse the conclusion. If we don’t have concrete evidence, we can conclude that the validity of some conclusions has not been established by any proof.

So we have very high probability of being misled.

The conclusion is of paramount importance. No argument can be absolutely convincing if it could not be supported by the evidence. Sherlock Holmes is a really good thinker, but our modern times need a different approach because the pseudo or false Sherlock Holmes of today are subtle and cunning.

Someone is always ready to sell you deceptive dreams.

Related Posts:
The Collection of my Poetry

Dreams – the trips of our soul.

Not Letting People Pull Your Tongue

Do You Have Recurrent Dream? What Could it Mean?