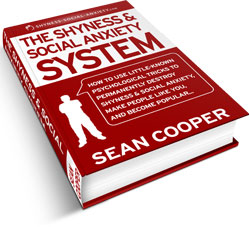 In our modern culture, everyone is focused on becoming more social, popular, and liked–since all of these personality traits come with many benefits. Extroverted people generally have more friends, fun and success than introverts. They also tend to suffer from loneliness and depression less. Becoming more outgoing and social is about living life to the fullest, unafraid to express yourself or go after what you want in life. Since being extroverted has so many benefits to it, it makes sense to want to get rid of your shyness.

Getting your conversation skills up to speed is one quick and easy way to start becoming less introverted. In particular, you want to start becoming more impulsive in what you say. While there are some situations, like job interviews, where you want to be very careful about what you say, in most you should focus on talking more often and more spontaneously. This is going to sound bad, but try not to think too much before you speak in informal social situations. If you put too much effort into everything you say, you’ll come across as a try-hard. By being spontaneous and just letting the words flow, you become easy-going, which is what people like.

In some situations you can probably already talk to people easily and spontaneously. It could be around your family, your niece or nephew, or talking to a close friend. However, when around people you don’t know well or are intimidated of, you aren’t able to act the same way. Your shyness gets in the way. A lot of the time, this issue can fix itself through gradual exposure. An intimidating stranger soon become a close friend if you hang around him several times. By spending more time with people you’ll start to get the hang of talking to strangers. Believe it or not, how well you make conversation is not a talent you were born with, but a skill set. Just like riding a bicycle, the more you practice this skill set the better you will become and the easier you’ll find it to be relaxed around new people

In lowering your levels of nervousness when talking to people, there are many useful techniques to help you relax. Relaxation has the effect of demonstrating to your brain that there is nothing to be afraid of in this situations, which makes your brain’s anxiety lessen. You want that: nothing kills feelings of nervousness and anxiety faster than physical relaxation.

Your relaxation routine should be structured in a way that gets you the maximum results in overcoming shyness. It is not an event, it is a process. It is more effective to implement relaxation as a new routine rather than try it out one time incorrectly when you are in the middle of a full-blown anxiety attack. It will be the compounding of accumulated change that yields the most substantial results. Set aside some time every day to practice relaxation. This will let you become relaxed when you are feeling at your most tense and nervous around people.

If you’d like to learn more about overcoming shyness, then click to read my blog on shyness and social anxiety.

Related Posts:
Don’t be a doormat or let people use you.

Why You Should Not Always Work

What is Wrong with Self Help Niche