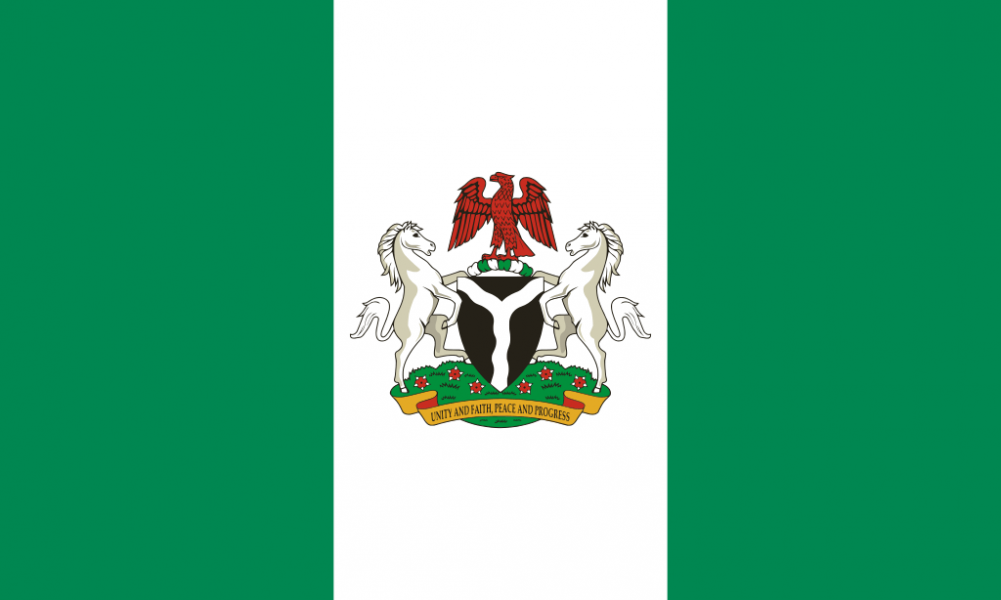 Shortly after extending its blockade to include oil, the Nigerian government launched a “police action” to retake the secessionist territory.[83] The war began on the early hours of 6 July 1967 when Nigerian Federal troops advanced in two columns into Biafra. The Biafra strategy had succeeded. The federal government had started the war, and the East was defending itself.[84] The Nigerian Army offensive was through the north of Biafra led by Colonel Mohammed Shuwa and the local military units were formed as the 1st Infantry Division. The division was led mostly by northern officers. After facing unexpectedly fierce resistance and high casualties, the right-hand Nigerian column advanced on the town of Nsukka, which fell on 14 July, while the left-hand column made for Garkem, which was captured on 12 July.

The Biafrans responded with an offensive of their own when, on 9 August, the Biafran forces moved west into the Mid-Western Nigerian region across the Niger river, passing through Benin City, until they were stopped at Ore (in present day Ondo State) just over the state boundary on 21 August, just 130 miles east of the Nigerian capital of Lagos. The Biafran attack was led by Lt. Col. Banjo, a Yoruba, with the Biafran rank of brigadier. The attack met little resistance and the Mid-West was easily taken over. 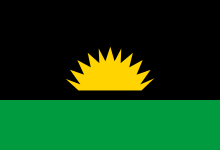 Flag of the Republic of Benin

This was due to the pre-secession arrangement that all soldiers should return to their regions to stop the spate of killings, in which Igbo soldiers had been major victims.[36][85] The Nigerian soldiers who were supposed to defend the Mid-West state were mostly Mid-West Igbo and, while some were in touch with their eastern counterparts, others resisted. General Gowon responded by asking Colonel Murtala Mohammed (who later became head of state in 1975) to form another division (the 2nd Infantry Division) to expel the Biafrans from the Mid-West, as well as to defend the West side and attack Biafra from the West as well. As Nigerian forces retook the Mid-West, the Biafran military administrator declared the Republic of Benin on 19 September, though it ceased to exist the next day. (The present country of Benin, west of Nigeria, was still named Dahomey at that time.)

Although Benin City was retaken by the Nigerians on 22 September, the Biafrans succeeded in their primary objective by tying down as many Nigerian Federal troops as they could. Gen. Gowon also launched an offensive into Biafra south from the Niger Delta to the riverine area, using the bulk of the Lagos Garrison command under Colonel Benjamin Adekunle (called the Black Scorpion) to form the 3rd Infantry Division (which was later renamed as the 3rd Marine Commando). As the war continued, the Nigerian Army recruited amongst a wider area, including the Yoruba, Itshekiri, Urhobo, Edo, Ijaw, etc.

The command was divided into two brigades with three battalions each. 1st brigade advanced 1 Brigade advanced on the axis Ogugu – Ogunga – Nsukka road while 2nd Brigade advanced on axis Gakem -Obudu – Ogoja road. By 10 July 1967, it had conquered all its assigned territories. By 12 July the 2nd brigade had captured Gakem, Ogudu, Ogoja. Enugu became the hub of secession and rebellion, and the Nigerian government believed that once Enugu was captured, the drive for secession would end. The plans to conquer Enugu began on 12 September 1967 and by 4 October 1967 the Nigerian Army had captured Enugu.[80] Nigerian soldiers under Murtala Mohammed carried out a mass killing of 700 civilians when they captured Asaba on the River Niger. The Nigerians were repulsed three times as they attempted to cross the River Niger during October, resulting in the loss of thousands of troops, dozens of tanks and equipment. The first attempt by the 2nd Infantry Division on 12 October to cross the Niger from the town of Asaba to the Biafran city of Onitsha cost the Nigerian Federal Army over 5,000 soldiers killed, wounded, captured or missing. Operation Tiger Claw (17–20 October 1967) was a military conflict between Nigerian and Biafran military forces. On 17 October 1967 Nigerians invaded Calabar led by the “Black Scorpion”, Benjamin Adekunle, while the Biafrans were led by Col. Ogbu Ogi, who was responsible for controlling the area between Calabar and Opobo, and Lynn Garrison, a foreign mercenary. The Biafrans came under immediate fire from the water and the air. For the next two days Biafran stations and military supplies were bombarded by the Nigerian air force. That same day Lynn Garrison reached Calabar but came under immediate fire by federal troops. By 20 October, Garrison’s forces withdrew from the battle while Col. Ogi officially surrendered to Gen. Adekunle. On 19 May 1968 Portharcourt was captured. With the capture of Enugu, Bonny, Calabar and Portharcourt, the outside world was left in no doubt of the Federal supremacy in the war.[80]

Control over petroleum in the Niger Delta was a paramount military objective during the war.

Oil exploration in Nigeria was pioneered by Shell-BP Petroleum Development Company in 1937. In a bid to control the oil in the eastern region, the Federal government placed a shipping embargo on the territory. This embargo did not involve oil tankers. The leadership of Biafra wrote to Shell-BP demanding royalties for the oil that was being explored in their region. After much deliberation, Shell-BP decided to pay Biafra the sum of 250,000 pounds. The news of this payment reached the Federal government, which immediately extended the shipping embargo to oil tankers The Nigerian government also made it clear to Shell-BP that it expected the company to pay all outstanding oil royalty immediately. With the stalling on the payment for Biafra government ask Shell-BP to stop operations in Biafra and took over from the company.[30]

Towards the end of July 1967, Nigerian federal troops and marines captured Bonny Island in the Niger Delta, thereby taking control of vital Shell-BP facilities.[86] Operations began again in May 1968, when Nigeria captured Port Harcourt. Its facilities had been damaged and needed repair.[87] Oil production and export continued, but at a lower level. The completion in 1969 of a new terminal at Forçados brought production up from 142,000 barrels/day in 1958 to 540,000 barrels/day in 1969. In 1970, this figure doubled to 1,080,000 barrels/day. The royalties enabled Nigeria to buy more weapons, hire mercenaries, etc. Biafra proved unable to compete on this economic level.[88]

Atrocities against Ethnic Minorities in Biafra[edit]

Minorities in Biafra suffered atrocities at the hands of those fighting for both sides of the conflict. The pogroms in the North in 1966 were indiscriminately directed against people from Eastern Nigeria.[89]

Despite a seemingly natural alliance among these victims of the pogroms in the north, tensions rose as minorities, who had always harbored an interest in having their own state within the Nigerian federation, were suspected of collaborating with Federal troops to undermine Biafra.[90]

The Federal troops were equally culpable of this crime. In the Rivers area, ethnic minorities sympathetic to Biafra were killed in the hundreds by federal troops. In Calabar, some 2000 Efiks were also killed by Federal troops.[91] Outside of the Biafra, atrocities were recorded against the resident of Asaba in present-day Delta State by both sides of the conflict.[92][93]