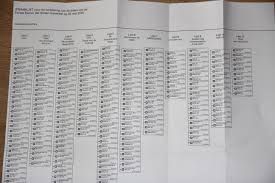 Those in the Netherlands have proven they are intelligent.

People were going to vote for Geert Wilders.

That was before the United States of America elected Donald Trump.

The world has watched with a mixture of mirth and horror as this hate filled semi-literate took office.  They reeled in shock at the lies he spewed, his childish behaviour, his retarded speech, and his ignorance.

It was not that a distinguished gentleman spewed, in the height of politically correct language, his racist rhetoric, and his misguided policies, it was that a guy as respectable as a rum shop drunk blathered, repeating himself, going on and on in the most offensive manner.

People in the Netherlands had too much self-respect to allow a far right candidate to take office.  Not that Wilders was expected to speak as uneducated and uncouth as Trump, but that they could not take the chance he would make the Netherlands the laughing stock of Europe.

Those in France and Germany who share the ‘far right’ sentiments, might very well NOT vote for the far right in fear they will find themselves with Trump.

Find themselves with a divisive clown with a spoiled brat mentality who believes that he is entitled and everyone else is not.   Find themselves being ridiculed and seeing their country fall apart.

Related Posts:
The Tapes that may exist about a conversation that didn’t happen

Talking Out of Both Sides of His Mouth

The Benefits of the Trump Effect

War With Korea? How Likely?