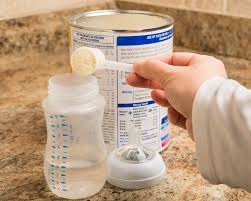 This is a true story.  I only change the names.

Desireen and her husband Errol were in New York City having arrived on student Visas from Jamaica.  Desireen became pregnant and obtained pre-natal care.

The doctors told her that she was very anemic and had vitamin deficiencies and gave her supplements.  When she was in her ninth month the Doctors strongly advised her not to try to breast feed as she could not give the baby the proper nourishment.

Errol was a medical student and read the results of her tests, and comprehended the situation and agreed with the physicians and Desireen had the baby and fed him formula.

A year later, despite taking supplements having a very good diet, she was still far below ‘normal’ standards, so when she became pregnant with their second child, there was no thought of breast feeding.

They graduated and returned to Jamaica with their children, and in a few years, Desireen was pregnant again. She obtain what is called ante-natal ‘care’.

Unlike the previous occasions in America where they took the various blood tests and advised her of her hemocrit and  vitamin levels, they didn’t say a word.  Desireen asked, and they told her she was ‘fine’.   She asked about anemia, about her calcium levels, and they assured her she was fine and could breast feed.

Desireen was not convinced that she had attained the required levels, and Errol and she went to a particular laboratory and did the tests and found that Desireen was anemic, had low calcium and various other vitamin deficiencies.

Yet, in Jamaica, these deficiencies were slapped away as minor and she was encouraged to breast feed.

They had a helper named Odette.  Errol took her for blood tests.   She had worse readings than Desireen.  She also had four kids she had breast fed.   One was bow legged, the other had lost teeth, and all of them were rather dull.   Odette said she had gone for ante-natal care.  That she was never told anything about anemia, about vitamins, about anything.  And was encouraged to breast feed, which she did.

Desireen did not breast feed her third child.  She gave her formula.

The questions that Errol had for the medical profession were slapped aside.   One doctor went so far as to tell him; “These people have no money, and further, how many could properly measure the formula anyway?”

An older doctor told Errol that when he was young, and the British were here, they gave out powdered milk free and many children were fed this instead of breast milk or along with breast milk.  That when he was growing up, health clinics were very pro-active.

Then, the British left, and within fifteen years the ‘breast is best’ campaign swamped the country and everyone was advised to breast feed, regardless of the condition of the mother.  Only where the mother was dead, critically ill, or had no milk, was formula prescribed.

Today, everyone is advised to breast feed, without any real testing or consideration of deficiencies.

I doubt Jamaica is the only country with this policy.

Related Posts:
Focusing on the Health of Women