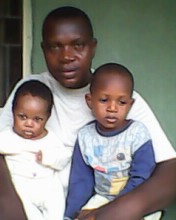 You want Children? Go and relieve a Pastor of burdens

There are couples whose gifts of children are divinely tied to the pronouncement of their spiritual leaders. The Pastor of the expectant couples gladly prays for the couple presenting their condition to God for relief. The pronouncement of spiritual leaders matter a lot. You can relieve your pastor by buying personal gifts for him-a car, clothes for sewing his wears, provisions, food stuffs, giving scholarship to one of his children, building a house for him or furnishing your pastor’s parlour etc.
Please read this story,” And it fell on a day, that Elisha passed to Shunem, where was a great woman; and she constrained him to eat bread. And so it was, that as often as he passed by, he turned in there to eat bread. And she said to her husband, Behold now, I perceive that this is an holy man of God, which passed by us continually. Let us make a little chamber, I pray thee, on the wall; and let us set for him there a bed, and a table, and a stool, and a candlestick: and it shall be, when he cometh to us that he shall turn in thither. And it fell on a day, that he came thither, and he turned into the chamber, and lay there. And he said to Gehazi his servant, Call this Shunammite. And when he had called her, she stood before him. And he said unto him, Say now unto her, Behold, thou hast been careful for us with all this care; what is to be done for thee? Would you be spoken for to the king, or to the captain of the host? And she answered, I dwell among mine own people. And he said, what then is to be done for her? And Gehazi answered, verily she hath no child, and her husband is old. And he said, Call her. And when he had called her, she stood in the door. And he said, About this season, according to the time of life, you shall embrace a son. And she said, No, my lord, you man of God, do not lie to thine handmaid. And the women conceived, and bare a son at that season that Elisha had said unto her, according to the time of life. (2nd Kings 4:8-17).
You can see from the story of Elisha and the woman of Shunem that she welcomed the man of God into her house, gave him bread and later prepared a transit accommodation for Elisha. She was blessed by the pronouncement of the man of God. At least the cry of a baby was heard in her house only when the man of God “Prophet Elisha “declared blessing on her. The writer of Chronicles, penned, “And they rose early in the morning, and went forth into the wilderness of Tekoa: and as they went forth, Jehoshaphat stood and said, Hear me, O Judah, and ye inhabitants of Jerusalem; Believe in the LORD your God, so shall ye be established; believe his prophets, so shall ye prosper. (2nd Chronicles 20:20)
Remember, The Old Testament Priest, Eli, confirmed the prayers of Hannah the mother of Samuel. The writer of 1st Samuel submitted,” Then Eli answered and said, Go in peace: and the God of Israel grant you your petition that you hast asked of him.(1 Samuel 1:17) .St Matthew recorded that Our Lord Jesus Christ said,” He that receives you(ministers of the gospel) receives me, and he that receives me receives him that sent me. He that receives a prophet in the name of a prophet shall receive a prophet’s reward; and he that receiveth a righteous man in the name of a righteous man shall receive a righteous man’s reward. And whosoever shall give to drink unto one of these little ones a cup of cold water only in the name of a disciple, verily I say unto you, he shall in no wise lose his reward. (Matthew 10:40-42)
The declarations of pastors and men of God after blessing them with gifts cannot be over emphasized. Many people have laughed home because they relieved the burdens of pastors.