Available Balance
Do You Know about The Igbos of South Eastern Nigeria?
Society & Culture
Samuel Ekechukwu
1 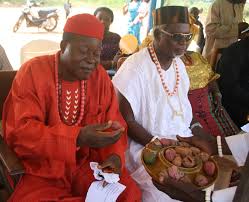 Historically, the Igbos trace their common ancestry to the Israelites. They claim to be part of the tribe of GAD, the son of Jacob whose father is Isaac and Abraham is his grandfather.
In quest of the Promised Land, they wandered to the now west coast of Africa and settled in the now South Eastern Nigeria with the Atlantic ocean forming a natural base. A place of the “Biblical Milk and Honey”. In this area of the world, God blessed the Igbo land with abundant natural and human resources.
Related Posts:
Put the Culinary Skills to Use

The weather of Igbo land is very conducive all round the year. There is no mineral resource that is absent in Igbo land. The palm and coconut trees produce oil, kernels and other resources .These are transformed as raw materials for industries producing food, beauty and industrial chemicals for further productions.
The Petroleum resource known as the “black Gold” has attracted nations to this area of the world. Before the British colonization of Africa, the kingdom of Biafra existed. The Igbo people are noted to have rich cultural heritage which is expressed in their language called “Igbo Language”. They worship God, engage in community ceremonies. They are mostly traders, technicians and farmers.
The Kola nut occupies a significant place in Igbo culture of the South Eastern Nigeria. The states of Nigeria where Kola nut is used for almost every sacred and social matters include Abia,Imo,Anambra,Ebonyi,Enugu,Rivers,Cross River,Akwa Ibom, Delta Anioma and parts of Kogi State where pockets of Igbo people dwell.’ The Igbos in Diaspora also keep the tradition of the usage of kola nuts.
’ Kola’ or ‘Cola’ is an African tree whose nuts yield an extract with caffeine, used in soft drinks and medicine. “The genus cola belongs to the family of ‘sterculialeae’ (Malves).According to Adebola Ayeyemi,(1980:137)in his book titled Agriculture for Africa, there are five species of kola nuts that produce edible seed among which Nigerian farmers recognize four types and given them local names. Two main species are presently of economic importance namely calanitida and cola accuminata.
With kola nuts the Igbos welcomes their guests. You are welcome to Igbo land. Which time will you like to visit Igbo land?