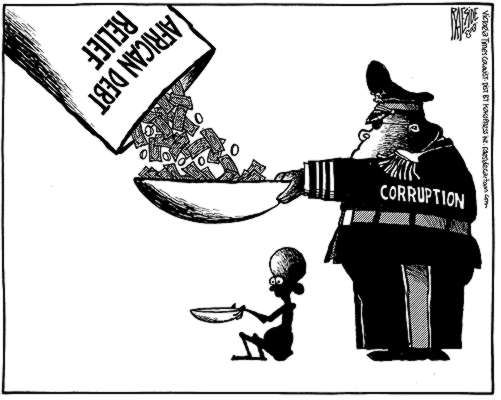 Abstract
Africa is endowed with abundant natural resources and it has attracted development aid from
the rich nations of the world. Despite these, the continent remains undeveloped. Different
reasons have been attributed to the African development crisis among the modernist school and
the dependency school. This study was undertaken to unravel the cause of the African
underdevelopment. The paper pinpoints that corruption is the core reason behind African
underdevelopment and it laid emphasis on corruption and underdevelopment interface in
Nigeria. For Africa to break the impasse of underdevelopment, the paper calls for good
governance and the establishment of special agencies to monitor all development projects
undertaking by African countries.
Keywords: Africa, Corruption, Socio-economic development, underdevelopment
INTRODUCTION
The attempt by countries in Africa to break the cycle underdevelopment has been hindered by
the high level of corruption in the continent. Africa is rich in natural resources and the proceeds
from the sales of these natural resources to other countries are mismanaged by African leaders
through corrupt process. Transparency International defines corruption as the abuse of
entrusted power for private benefit (Transparency International, 2006). Since the early 1960s
when most African countries were gaining independence, the rich nations of the world have
extended development aids to Africa, yet Africa remains the lease developed continent in the
world. Different schools of thought have come out with the causes of underdevelopment in
Africa. For instance, the modernist school believes that Africa needs to follow the development
part of the industrialized nations before it can develop. On the contrary, the dependency
theorists argued that the exploitation of African by the superpowers was responsible for African
Related Posts:
Who’s Going To Win The French Presidential Election On May 7, 2017?

underdevelopment. However, there is the new school of thought that postulates corruption in
Africa hinders development. Corruption affects the development in various ways. For example,
billion of dollars that would have been used to provide social amenities in some African
countries such as Nigeria are siphon and kept in foreign accounts. The former World Bank
president, Paul Wolfowitz revealed that public officials in Nigeria have embezzled more than
$300 billion from the nation’s pulse for the past forty decades (Ndibe, 2006). This statement was
supported by the former chairman of the Economic and Financial Crimes Commission (EFCC),
Nuhu Ribadu and the former World Bank Vice President for Africa, Oby Ezekweili who stressed
that Nigerians leaders have stolen over $400 billion from the sales of crude oil since
independence. The over $400 billion that has been stolen from Nigeria would have impacted the
development progress in Nigeria if such a huge amount has been channelled to aid
development. Tanzi and Davoodi (1997) detect four outlets through which corruption may have
an adverse effect on economic growth: higher public investment, lower government revenues,
lower expenditures on business operations and maintenance, and lower quality of public
infrastructure. According to Uneke (2010):
Corruption, because of its pervasiveness in many countries in Africa South of the
Sahara, is detrimental to social, political, and economic development in a variety of ways. A
program of sustainable development is contingent on several conditions, including principled
and purposeful leadership; prudent, rational and far-sighted decision-making; and optimum use
of available resources. Corruption tends to undermine all these conditions in terms of public
cynicism and erosion of confidence on corrupt leadership; irrational, short sighted and ill-
motivated decision; and squandering of resources on ill-advised or unsuitable projects. The
result has developmental stagnation, poverty, the cynicism of the political leadership, and
disillusionment and hopelessness on the part of the masses and the deprived

High end corruption is practiced at procurement offices in every department in any government in Africa. Perpetrators are mostly senior civil servants.