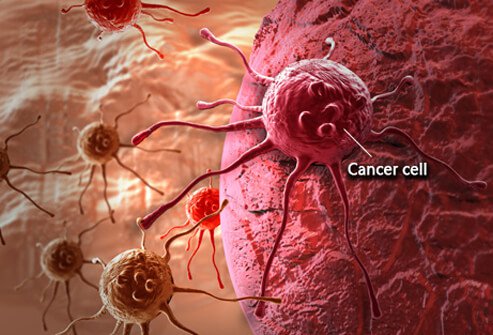 Cancer is the uncontrolled growth of abnormal cells anywhere in a body. These abnormal cells are termed cancer cells, malignant cells, or tumor cells. These cells can infiltrate normal body tissues. Many cancers and the abnormal cells that compose the cancer tissue are further identified by the name of the tissue that the abnormal cells originated from (for example, breast cancer, lung cancer, colon cancer). Cancer is not confined to humans; animals and other living organisms can get cancer. Below is a schematic that shows normal cell division and how when a cell is damaged or altered without repair to its system, the cell usually dies. Also shown is what occurs when such damaged or unrepaired cells do not die and become cancer cells and show uncontrolled division and growth — a mass of cancer cells develop. Frequently, cancer cells can break away from this original mass of cells, travel through the blood and lymph systems, and lodge in other organs where they can again repeat the uncontrolled growth cycle. This process of cancer cells leaving an area and growing in another body area is termed metastatic spread or metastasis. For example, if breast cancer cells spread to a bone, it means that the individual has metastatic breast cancer to bone. This is not the same as “bone cancer,” which would mean the cancer had started in the bone.

The following table (National Cancer Institute 2016) gives the estimated numbers of new cases and deaths for each common cancer type:

The three most common cancers in men, women, and children in the U.S. are as follows:

Different areas of the world may have cancers that are either more or less predominant then those found in the U.S. One example is that stomach cancer is often found in Japan, while it is rarely found in the U.S. This usually represents a combination of environmental and genetic factors.

What are risk factors and causes of cancer?

Anything that may cause a normal body cell to develop abnormally potentially can cause cancer. Many things can cause cell abnormalities and have been linked to cancer development. Some cancer causes remain unknown while other cancers have environmental or lifestyle triggers or may develop from more than one known cause. Some may be developmentally influenced by a person’s genetic makeup. Many patients develop cancer due to a combination of these factors. Although it is often difficult or impossible to determine the initiating event(s) that cause a cancer to develop in a specific person, research has provided clinicians with a number of likely causes that alone or in concert with other causes, are the likely candidates for initiating cancer. The following is a listing of major causes and is not all-inclusive as specific causes are routinely added as research advances:

Genetics: A number of specific cancers have been linked to human genes and are as follows: breast, ovarian, colorectal, prostate, skin and melanoma; the specific genes and other details are beyond the scope of this general article so the reader is referred to the National Cancer Institute for more details about genetics and cancer.

It is important to point out that most everyone has risk factors for cancer and is exposed to cancer-causing substances (for example, sunlight, secondary cigarette smoke, and X-rays) during their lifetime, but many individuals do not develop cancer. In addition, many people have the genes that are linked to cancer but do not develop it. Why? Although researchers may not be able give a satisfactory answer for every individual, it is clear that the higher the amount or level of cancer-causing materials a person is exposed to, the higher the chance the person will develop cancer. In addition, the people with genetic links to cancer may not develop it for similar reasons (lack of enough stimulus to make the genes function). In addition, some people may have a heightened immune response that controls or eliminates cells that are or potentially may become cancer cells. There is evidence that even certain dietary lifestyles may play a significant role in conjunction with the immune system to allow or prevent cancer cell survival. For these reasons, it is difficult to assign a specific cause of cancer to many individuals.

Recently, other risk factors have been added to the list of items that may increase cancer risk. Specifically, red meat (such as beef, lamb, and pork) was classified by the International Agency for Research on Cancer as a high-risk agent for potentially causing cancers; in addition processed meats (salted, smoked, preserved, and/or cured meats) were placed on the carcinogenic list. Individuals that eat a lot of barbecued meat may also increase risk due to compounds formed at high temperatures. Other less defined situations that may increase the risk of certain cancers include obesity, lack of exercise, chronic inflammation, and hormones, especially those hormones used for replacement therapy. Other items such as cell phones have been heavily studied. In 2011, the World Health Organization classified cell phone low energy radiation as “possibly carcinogenic,” but this is a very low risk level that puts cell phones at the same risk as caffeine and pickled vegetables.

Eight Herbs That Help In The Fight Against Cancer

Six Things To Avoid In The Environment

Cancer Is Very Dangerous – What Is Cancer?

Proving that a substance does not cause or is not related to increased cancer risk is difficult. For example, antiperspirants are considered to possibly be related to breast cancer by some investigators and not by others. The official stance by the NCI is “additional research is needed to investigate this relationship and other factors that may be involved.” This unsatisfying conclusion is presented because the data collected so far is contradictory. Other claims that are similar require intense and expensive research that may never be done. Reasonable advice might be to avoid large amounts of any compounds even remotely linked to cancer, although it may be difficult to do in complex, technologically advanced modern societies.