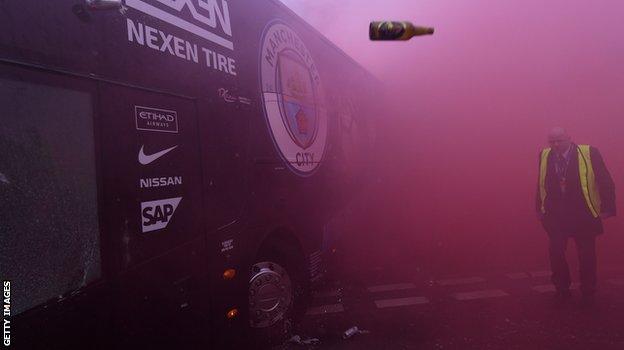 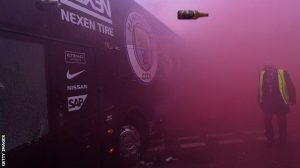 Manchester City boss Pep Guardiola says he “doesn’t understand” why his team’s bus was attacked before their Champions League tie with Liverpool at Anfield.

After the 3-0 quarter-final first-leg loss, Guardiola said that preventative action should have been taken as police “knew it was going to happen”.

No players or staff were injured but two police officers were hurt and the coach was left unsafe to be driven.

Merseyside Police match commander Superintendent Paul White said the force “will conduct enquiries to identify who was responsible and bring them to justice”.

He added: “The officers and stewards are there to protect the public and keep them safe. It is disappointing to see that a number of people behaved in this appalling way.”

Uefa are waiting to receive reports before deciding whether to open a disciplinary case.

What happened outside the ground?

Earlier on Wednesday, Merseyside Police had issued a statement saying the two team coaches would “not be taking their usual route” because of “building works and to ensure the safety of fans”.

Liverpool also disseminated that information and asked their supporters “to gather to show their passion and support for the team… in a friendly, respectful and considerate manner”.

However, by the time the City coach went past the stadium, a large crowd had gathered outside and cans, bottles and flares were thrown.

The Anfield club told BBC Sport on Thursday that it is common practice to share such information with fans and that, after consultation with police, they felt it was in the interest of public safety to do so.

Guardiola said he “did not expect” the incident to happen and referenced theattack on the Borussia Dortmund’s team bus last April, which left defender Marc Bartra injured.

“Normally when the police know it is going to happen, they tried to avoid it from happening,” said ex-Barcelona and Bayern Munich boss Guardiola. “One year ago something happened in Dortmund.

“We come here to play football and I don’t understand this kind of situation.

“The bus is destroyed but I did not expect a prestigious club like Liverpool doing this kind of thing. It is not Liverpool, it is the people, maybe one, two or three, but hopefully it does not happen again.”

Liverpool said in a statement: “We apologise unreservedly to Pep Guardiola, his players, staff and officials. The priority now is to establish the facts and offer Manchester City whatever support is necessary.”

‘I don’t mind supporters doing that’

Former Liverpool captain Steven Gerrard said that the scenes “sour the night for the club”.

“We want a great atmosphere and we want to make it hostile for the opposition but certain individuals have overstepped the line and it’s bang out of order,” he said on BT Sport.

However, Guardiola’s players were keen to play down the incident.

Captain Vincent Kompany said it “had no effect on us” and that it was something they have experienced before, while midfielder Kevin De Bruyne said there was “nothing wrong with it”.

“It was OK,” the Belgian said. “I don’t mind supporters doing that – I’ve had it a couple of times for my team and it’s a nice feeling.

“I am fine with it as long as no one gets hurt. It doesn’t change anything [for the players]. As long as you keep the violence down, there’s nothing wrong with it.”