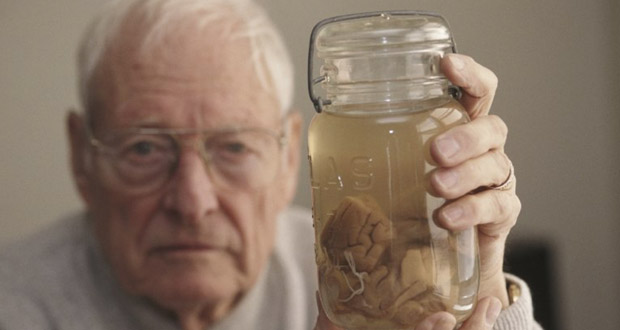 Thomas Harvey, the pathologist on call at the time of Albert Einstein’s death, stole Einstein’s brain, later promising to share it with the scientific community for the sole purpose of scientific study. Harvey stole the brain despite Einstein’s wishes to be cremated and was fired from Princeton Hospital for refusing to return it. In the following years, Harvey would take his treasured brain with him in pieces as he moved to several locations in the Midwest, making good on his promise to Einstein’s family and the world by sending segments of the brain to various researchers over the years while taking the brain on a bizarre journey. The research that was eventually performed and published showed many differences between Einstein’s brain and those of individuals with average intelligence, leading some scientists to conclude that these differences allowed Einstein to unlock the secrets of the universe.
The Whole Bushel
Albert Einstein died on April 18, 1955, at the age of 76. He made it well known that he wanted his remains cremated and his ashes scattered so that his body or parts of it wouldn’t be stolen, studied or even worshiped. Thomas Harvey, the pathologist on call at Princeton Hospital, stole Einstein’s brain anyway with blatant disregard to Einstein’s wishes and the wishes of his family. He later convinced Einstein’s son, Hans Albert to give him retroactive permission to keep and study the brain with the provision that Harvey promised to share it with other researchers and only use it for the benefit of science and for research publications only in upstanding journals.
From there, Einstein’s brain started on an unusual journey. After losing his job at Princeton Hospital likely due to his obsession over the brain and his unwillingness to return it to the hospital, Harvey took the brain to the University of Pennsylvania where he photographed the intact brain from numerous angles. He subsequently dissected it into 240 small sections, preserved it in a rubbery substance called celloidin and kept the pieces in two jars filled with alcohol in his basement. He narrowly saved the brain from being lost forever when he retrieved it from his wife, who threatened to discard it. Harvey then moved his treasured brain out to Wichita, Kansas where he stored it in a cider box underneath a beer cooler for over 20 years. He would often send pieces of the brain to various researchers over the years who were interested in studying it. He moved again to Weston, Missouri, where he lost his medical license after failing a competency exam, but continued to study the brain. He relocated again to Lawrence, Kansas, where he and his brain shared a small second-floor apartment adjacent to a gas station. Ironically, Harvey had believed that possessing Einstein’s brain would help advance his medical career, yet he wound up working on an assembly line in a plastic-extrusion factory to pay the bills.
Harvey had planned to return the brain to Einstein’s granddaughter, Evelyn, but after finding out she didn’t want it, he finally returned the remaining brain segments in his possession to University Medical Center at Princeton in 1998. He died in 2007. Eventually, 46 slides of Einstein’s brain were donated to the Mutter Museum of The College of Physicians of Philadelphia by a neuropathologist from the Children’s Hospital of Philadelphia. However, the bulk of the brain still remains at University Medical Center at Princeton, finalizing its bizarre journey.
Our brain burglar (Harvey) actually did humanity a favor in defying Einstein’s wishes. He kept his word to Einstein’s son and allowed other scientists to study various brain sections. Numerous anomalies where discovered that may be attributed to Einstein’s genius, including a higher than average ratio of glial cells to neurons. These cells support and nourish the brain, form the myelin, which coats and insulates the neurons and aid in transmitting signals throughout the brain. Another difference between Einstein’s brain and individuals of average intelligence was a more developed corpus callosum, which is a bundle of nerves that allows for communication between the two halves of the brain. Most scientists who studied the brain noted that it did not exhibit any of the usual degenerative characteristics one would normally find in the brain of a 76-year-old male. Other unusual differences in various structures and cells were also noted in later research done in the 1980’s. This included a 15% larger than normal inferior parietal lobe, as well as a missing part of its Sylvian fissure. Some researchers believe that these and other differences allowed for much-improved functioning and communication between different parts of his brain, which made Einstein arguably the greatest genius of modern times